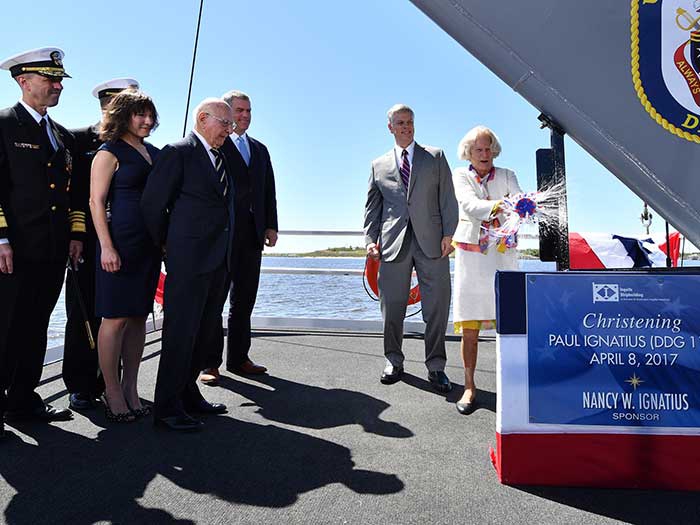 “These Arleigh Burke destroyers provide our leaders with the ability to conduct a wide range of missions,” said Chief of Naval Operations Adm. John M. Richardson. “That kind of flexibility is increasingly important in the world of maritime competition. … USS Ignatius and her crew will be doing the nation’s work, providing credible options to our nation’s leaders for decades to come. They’ll be respected always, welcome news to our friends and a worst nightmare to our enemies.”

DDG 117 is named in honor of Paul Ignatius, who attended the ceremony, served as the United States’ 59th Secretary of the Navy from 1967 to 1969, during the administrations of presidents John F. Kennedy and Lyndon B. Johnson.
“I want to express my appreciation to the men and women of one of the world’s best—if not the best shipyard—here at Huntington Ingalls, whose ships, as their motto proudly proclaims, are built stronger than steel,” Ignatius said. “One of the great strengths of our country is the industrial might that builds ships, tanks and airplanes that ensured victory in World War II and that continue to undergird our efforts to maintain stability amid the new threats that face us.”

Nancy W. Ignatius, his wife, is the ship’s sponsor and officially christened the ship after successfully breaking a bottle of sparkling wine across its bow.

Paul and Nancy Ignatius have been married nearly 70 years and have four children together. They were escorted to the platform by Ingalls Shipbuilding President Brian Cuccias.

“Ingalls ships are built with one goal in mind: to protect the brave men and women who protect our freedom,” Cuccias said. “Working closely with our Navy partner, we continue to improve on each ship we build. And the Paul Ignatius will be no exception. Today, we are investing hundreds of millions of dollars in modernizing our facilities alongside our partners, the leadership of the great state of Mississippi. Combine that with a hot production line and our talented and experienced shipbuilders, and we are uniquely positioned to provide our country with the highest quality, most capable destroyers in the fleet. Simply stated, Ingalls builds the finest, most capable warships the world has ever known … right here in Pascagoula, Mississippi.”