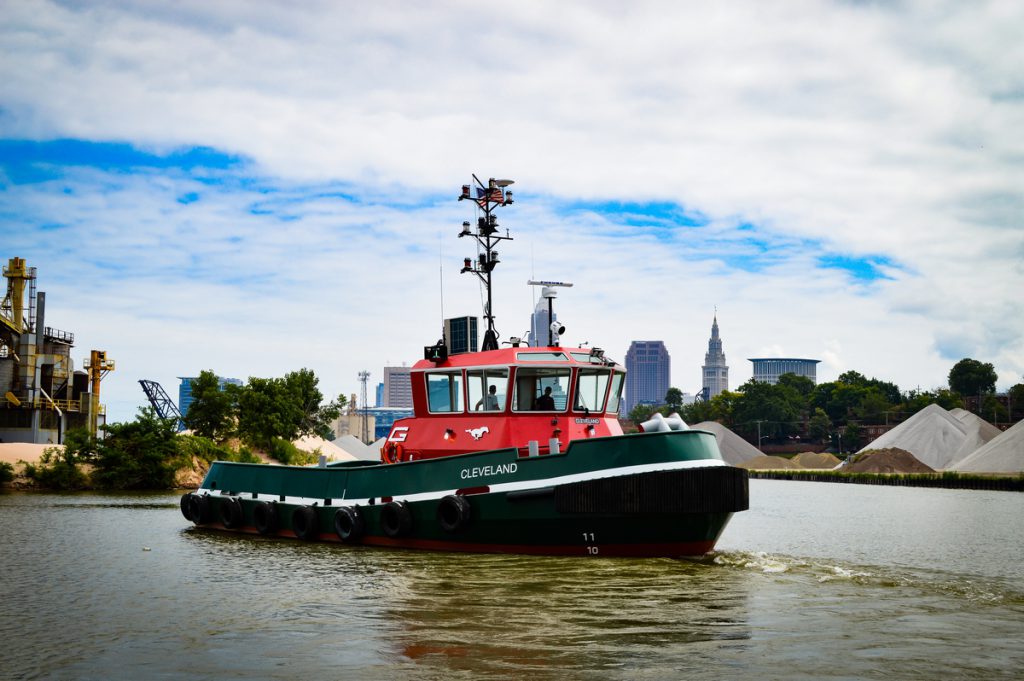 Delivery of the tug, named Cleveland, marks a significant milestone in a licencing program agreed between Damen Shipyards Group in the Netherlands and Great Lakes Shipyard following discussions that began in 2014.

While the initial agreement is for the series build of ten tugs for Great Lakes Towing, vessels will also be available to third party buyers on a priority basis.

The Stan Tug 1907 ICE is a compact design capable of 30 tons of bollard pull. Its relatively small size and high maneuverability make it ideal for the narrow waterways with many low bridges found in the Great Lakes region. The tug’s ability to operate safely in icy waters is also essential given the very cold temperatures that occur there in the winter.

The Cleveland has got off to a good start. On her first morning in service she “was put to work for two ship assists. The first was for Fednav International Limited, Montreal, and the second was for Rand Corporation, based in New Jersey,” reported Joe Starck, President of Great Lakes Shipyard and the Towing Company. “Both tows went without a hitch and the feedback then and since has been very positive. One of the pilots on the first day even commented that the new tug made maneuvering much easier. The boat has performed even better than we expected, without the need for the typical ‘tweaks’ that are normally required after completion of a new tug.”

As might be expected, the build of the Cleveland was something of a learning experience, not least because various European shipbuilding practices had to be translated into their American equivalents, and numerous adaptations had to be made to meet American regulations. However, following this initial build, the production process is now optimized for the follow-on hulls to be completed more quickly and efficiently.

“Damen was always there when we needed them,” said Joe Starck. “It has truly been a pleasure to work with them, and we have really enjoyed getting to know the entire Damen team. They’re a first class organization.”