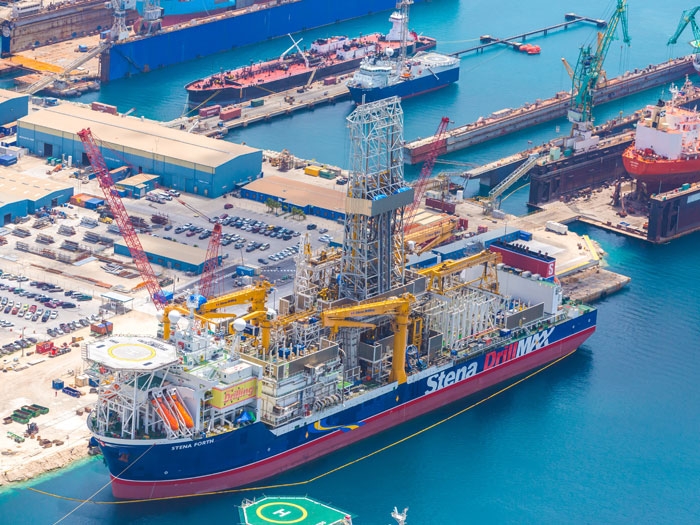 Stena Forth at Grand Bahama Shipyard

Owned by Stena Drilling, Stena Forth has overall dimensions of 228.34 m by 42 m and operates in the Gulf of Mexico. It is capable of drilling in water depths of up to 3,048m.

To prepare for the contract, the shipyard invested heavily in transforming its North Beach berth to a fully operational 28,750 sq.m offshore repair facility. To achieve the requirements set by Stena, GBSL had to dredge the adjacent area to an average water depth of 20 m with four pits dredged to 24 m depth to accommodate work on the ship’s thrusters.

With the facility upgrades completed, in conjunction with Stena, GBSL developed a time/cost effective plan to complete this project at the new repair berth and a 60 day repair period was negotiated and agreed.

One major part of the project was the afloat removal, and refit of four Rolls-Royce Azimuth thrusters. The work was carried out under the guidance of Rolls-Royce using a local diving company to release the units. They were then lifted to the surface, using a barge mounted strain jack and a shoreside crane (Liebherr LTM1750-9.1) capable of lifting 900 tons, and swapped with refurbished thrusters.

Another main project saw the shipyard support National Oilwell Varco with the removal, overhaul and replacement of the sheave clusters using a Manitowoc 18000 w/ Wheeled MAX-ER with a crane capacity at 200 ft. of 120 tons.

Additionally, Grand Bahama Shipyard repaired hull indentations, prepared and painted the hull, replaced carbon and stainless steel pipe, performed accommodations refurbishments, watertight door replacements, fabrication and installation of cuttings dryer platform including modification of existing structure and services (including vent and pipes) and serviced the vessel for the duration of the project.

The Stena Forth had visited Grand Bahama shipyard before.

“In January 2014 GBSL was awarded the contract to lift a BOP stack onto the Stena Forth, this was successfully performed and thereafter discussions and negotiations commenced regarding the possibility of performing the rig’s five year classification renewal program at Freeport, Bahamas,” says Grand Bahama Shipyard SVP Graham Couser.

“Securing this renewal program challenged our traditional way of approaching project development and execution,” he continued. “We are delighted with the outcome and knowing the limited options available to operators such as Stena in this region, the success of this project is essential to the development of this market segment for the yard.”