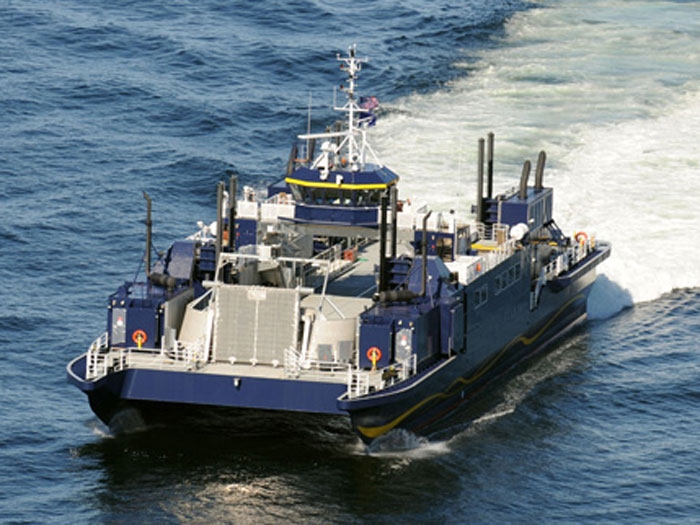 Built as a technology demonstrator for the Office of Naval Research (ONR), the vessel has a catamaran mode for high speeds; a small-water-area-twin-hull (SWATH) mode for stability in high sea states; and a shallow-draft landing-craft mode that provides substantial buoyancy for maneuvering in shallow water. It is designed with a center “barge” that can be hydraulically raised and lowered, while the buoyancy of its catamaran hulls can be adjusted while under way. It can carry up to 129 passengers, 20 vehicles and has a 35-ton overall freight capacity. It can land on beaches in as little as four feet of water.

However, as we noted on, April 1, 2013, “since completion in 2011, it has functioned only in white elephant mode. With no suitable docks and no workable route, it has been costing Mat-Su Borough an average $75,000 a month for insurance, maintenance, fuel, docking fees and other expenses.”

Since then, the Mat Su Borough has gotten the maintenance drain down to about $30,000 a month, but has been desperately trying to get the ferry off its hands.

Now it looks to have found a buyer who can put the vessel’s versatility to good use. On September 1, the Mat-Su Assembly gave  Borough Manager John Moosey approval to sell Susitna for $1.75 million to the Philippines Red Cross.

That’s the good news for Mat-Su taxpayers. The not so good? They may still be on the hook for some $12.3 million received in federal funding from the Federal Transit Administration. The Borough is “in discussions regarding the obligation and what may be done to mitigate a portion of this obligation.”

Here’s the text of a statement on the pending sale issued by the Mat-Su Assembly:

The Susitna Ferry will be plying the Philippine Sea delivering food and supplies to island shores and serving as a floating hospital after hurricanes if a near-final sale is completed between the Matanuska-Susitna Borough and the Philippine Red Cross. The Assembly gave Mat-Su Borough Manager John Moosey the approval to finalize the deal late last night (Sept. 1).

For $1.75 million, the international humanitarian organization seeks to buy the Susitna Ferry, a ship that is capable of operating as both a cargo-loaded barge that can haul itself onto shore and a twin-hulled vessel that cuts through choppy seas. The Susitna was built as a smaller scale prototype for the U.S. Navy, which funded most of the construction costs for the $80 million vessel.

“There is an average of 170 maritime accidents in the country every year, mostly in the Visayas area. The ship will be used to provide disaster relief and emergency services. It will also provide search and rescue services after maritime disasters. The Susitna will serve as a mobile clinic/hospital ship serving some of the most isolated of the 7,107 Philippine Islands.,” he said. “This ship will also be made available to other Red Cross societies in other countries for saving lives. Other government and non-government organizations involved in disaster relief and recovery operations may avail of the vessel,” Gordon said.

Manager Moosey inherited the project when he arrived at the Borough four years ago. The Susitna was an attempt at connecting the two miles of water separating the rural, growing Borough and land-crowded Anchorage with ferry passenger service. The ship was also intended to serve as a rescue craft if passenger airliners fell into icy Cook Inlet. A ferry terminal was built on the Borough side, but ferry landings on both sides of Knik Arm were never fully funded.

EXHAUSTIVE EFFORTS TO DISPOSE OF THE SHIP

“I’m elated that this ship will be put to the noble work of saving lives after disasters in the Phillipines. We exhausted our options on disposing of this vessel. It’s time to give it new life, and release our taxpayers from the burden of its upkeep,” Moosey said.

Conditions of the sale:

Because the Susitna was a military prototype, the Borough must get written consent of federal agencies before the sale to a foreign entity. The Borough has been working for the past nine months on the approval. Borough Attorney Nick Spiropoulos said the Borough is nearly at day 90 in the timeline for the decision. It’s not clear when the federal government will make its determination, but he said he hoped it was in the next 30 days.

The Borough also received some $12.3 million in federal funding from the Federal Transit Administration for the ship project and construction of the ferry terminal building and has been informed by FTA of an obligation to repay the grants. The Borough is in discussions regarding the obligation and what may be done to mitigate a portion of this obligation.

See attached here a memo from internal auditor James Wilson to Manager John Moosey on specifics of the sale.