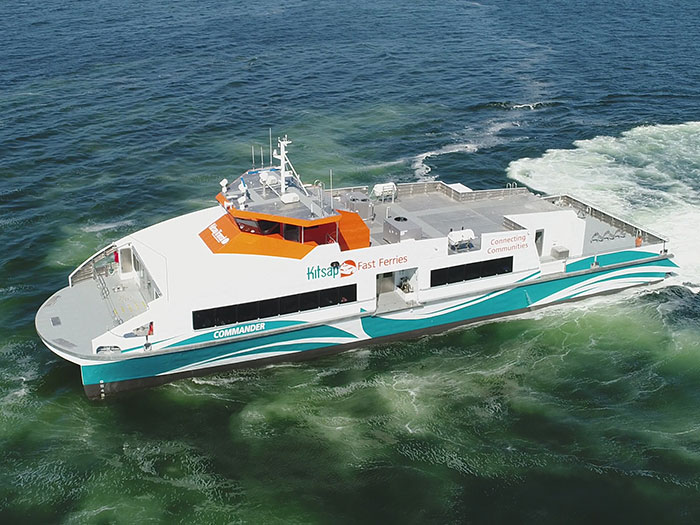 Nichols Brothers Boat Builders (NBBB) has delivered the second of two 255-passenger-only ferries to Kitsap Transit of Bremerton, Wash. Like the first-in-class-vessel, the Enetai, the second, Commander, out-performed design expectations during vessel trials.

“Customer friendly, modern, reliable ferries is what the Pacific Northwest needs, and Kitsap Transit is making it happen,” said Nick Zustiak, Director of Manufacturing at NBBB. “Although the builds of the Enetai and Commander were challenging during the pandemic the team pulled together and delivered high-quality vessels.”

Kitsap Transit awarded the design and construction contract for the two ferries to Nichols Brothers in December 2018. The shipyard partnered with Southampton, U.K.-based BMT for the design.

They are among the first ferries to feature a selective catalytic reduction (SCR) exhaust after treatment system.

During vessel trials the Commander and the Enetai exceeded 40 knots, bettering the speed expectations by 3-knots and bringing up the vessels’ cruising speed to 38 knots at full load. The Naiad active ride control system ensured a smooth comfortable ride at the high speed.

In addition to their 255-passenger capacity, the vessels each accommodate 26 bicycles, a must for Seattle commuters. Onboard amenities include an advanced Bronswerkheating and air conditioning system. The vessels are equipped with high-speed wifi connectivity and seats and tables are outfitted with outlets and USB ports for laptop and phone charging.

“The two Kitsap Transit ferries were built during the global COVID-19 pandemic, forcing Nichols Brothers Boat Builders to significantly re-arrange production to allow for safety protocols required to protect our workforce. Kitsap Transit was incredible to work with showing encouragement toward the safety of our people and operations,” said Gavin Higgins, NBBB CEO. “As the region returns to normalcy it is exciting and rewarding to see two new ferries built by NBBB operating right here in the pacific northwest.”