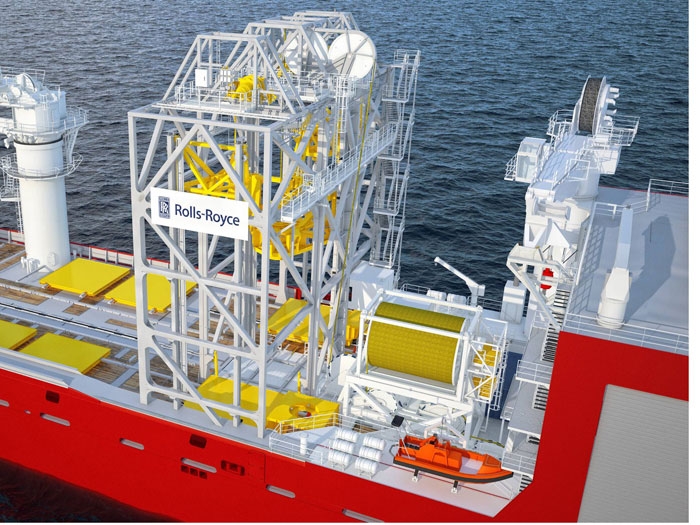 OCTOBER 29, 2014 — Rolls-Royce has won its largest subsea vessel project yet. It has signed a £24 million (about $38.7 million) contract with Ocean Yield ASA that will see it supply a complete module handling system to the subsea construction vessel Aker Wayfarer.

The vessel was built by the Vard’s Søviknes, Norway, shipyard in 2010 and is on long term charter to AKOFS Offshore. It is being modified to provide subsea intervention services offshore Brazil under a $465 million, five year Petrobras contract. A similar system was installed by Rolls-Royce in 2009 onboard the AKOFS operated subsea equipment support vessel Skandi Santos, which has now been working for Petrobras for nearly five years under a contract that was recently extended for a further five years. The vessel has successfully installed and retrieved subsea trees and modules in water depths up to 2,300 meters.

The modifications to Aker Wayfarer are taking place at Kleven’s Myklebust shipyard in Norway.

John Knudsen, Rolls-Royce President Commercial Marine, said: “This a very important contract for Rolls-Royce and it shows that the offshore industry has taken yet another step in accepting the superior performance of synthetic fiber ropes for lifting operations in deep and ultra-deep waters.”

At 157 m long and 27 m wide, Aker Wayfarer will be the largest vessel that has been in dock at Myklebust Verft.

“We acquired this dock two years ago, in order to facilitate service, repair and rebuilding of larger offshore vessels, just like Aker Wayfarer,” says Ståle Rasmussen, CEO of Kleven. “Myklebust Verft’s location, in the very heart of the maritime cluster at Sunnmøre, is a great advantage for all parties involved, and this project serves as a great example of local cooperation between Kleven, Vard and Rolls-Royce.”

Geir Sjøberg, CEO of AKOFS Offshore, said: “Skandi Santos has been rated by Petrobras as one of their top performing vessels. Its track record makes us confident in the decision to install the handling system from Rolls-Royce on Aker Wayfarer.”