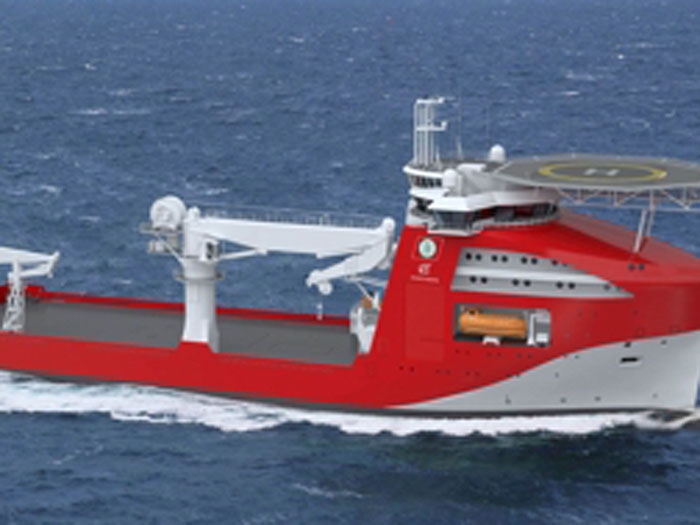 MARCH 12, 2015 — Bergen, Norway, headquartered Noryards has booked an order from Norway’s BOA Offshore for a 108 m x 24 m eco-friendly Inspection Maintenance and Repair (IMR) Vessel. The total contract value is in the range of NOK 700 million (about $86.5 million) and includes options for two further vessels.

Noryards is providing engineering, construction and outfitting of the highly advanced IMR vessel, with the design developed in close cooperation with BOA Offshore. Noryards says the end result will be a vessel that meets both BOA’s operational demands and the industry’s highest safety and environmental standards.

Noryards is the company formed in 2013 when the Bergen Group decided to divest itself of its shipbuilding activities. It was initially 51 percent owned by Calexco, a company with the same owner as Ukraine’s JSC Zaliv Shipyard, Ukrainian billionaire Kostyantin Zhevago. Since then, the Zaliv Shipyard has been seized by Russia in its annexation of the Crimea and Calexco now owns 100 percent of Noryards. Though original plans envisaged Noryards hulls being fabricated in the Zaliv shipyard, obviously that’s not going to happen anytime soon. Meantime, Noryards is getting its hulls from yards in Turkey, Poland or Romania.

In the case of the IMR vessel just contracted by BOA, the hull will come from the Tersan shipyard in Turkey and is scheduled to arrive at Noryards Fosen, in Rissa, Norway, for outfitting mid 2016. Delivery of the completed ship is scheduled for first quarter 2017.

The newbuilding will, says Noryards, “be one of the most energy-efficient vessel of its class, utilizing a number of features that contribute to optimal operational performance, low emissions and reduced fuel consumption.”

Noryards secured the contract based on the yard group’s capabilities and recent record of accomplishment in the highly specialized segment of advanced and eco-friendly offshore vessels. It is the third consecutive Boa contract for Noryards, following Boa Bison launched at Noryards Fosen last year and Boa Jarl, currently under construction at Noryards.

“An IMR Vessel has to handle a wide range of operations under challenging conditions.,” says Helge Kvalvik, CEO of Boa Offshore. “We have set demanding requirements for this vessel’s performance and capabilities with a clear focus on quality, cost-efficiency, operational precision and safety. The outcome is a vessel that not only meets the highest operational and safety standards, but we also have achieved to find solutions in cooperation with Noryards with a design that we expect will contribute to a greener and more sustainable shipping. By assigning Noryards we are confident that this complex project is in good hands.”

In addition to state-of-the-art fuel-efficiency, the vessel will have an impressive free deck space and a high crewing / operator capacity relative to it’s size. Optimal comfort for crew and operators will be ensured, including modern facilities for execution of effective IMR operations.

“Building long-term relations with key customers is important for Noryards, and I am very pleased with the strong cooperation we have developed with key staff and management of BOA,” says Ivar Hanson, CEO of Noryards. “The contract confirms a long standing and strong relations between BOA and Noryards, and this order reinforces our position as a leading provider of technologically advanced and eco-friendly offshore vessels.”

“In a time where good new shipbuilding projects are few and far between it was of vital importance for Noryards Fosen to win this order,” says Anders Straumsheim, head of Noryards Fosen. “This order is of high importance for employees, subcontractors and for the general business community in the Fosen area.”