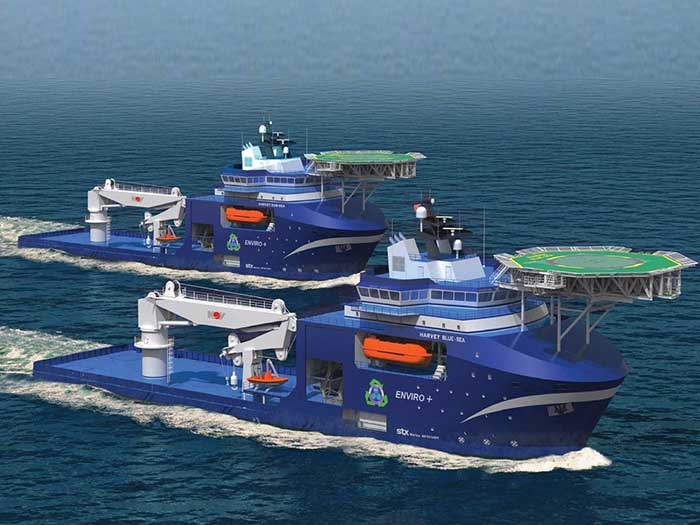 Harvey Gulf says that this first vessel, the M/V Harvey Sub-Sea is a “best in class” Jones Act-qualified vessel that “has the technical capabilities to efficiently, effectively and safely perform high quality field development activities that are currently being performed by a foreign fleet.”

The U.S. Customs & Border Protection (CBP) is finalizing a decision to revoke previous letter rulings, inconsistent with the the Jones Act, that had permitted the use of foreign-flag vessels for subsea construction, inspection and maintenance activities (see earlier story).

This delivery is part of an industry-wide $2 billion investment since 2009 to ensure the Jones Act fleet has capacity to meet the needs of the offshore industry.

“Today ends the debate as to whether the U.S. Jones Act fleet of MPSV’s is capable of doing work that foreign vessels have been doing illegally in the Gulf for many years,” says Shane Guidry, Chairman and CEO of Harvey Gulf. “The Harvey Sub-Sea has the size, crane capacity, deck space, accommodations, equipment, and station keeping capability equivalent to, or better than, her foreign competitors

“The Harvey Sub-Sea can perform a broad spectrum of subsea installations and removals, inspection, repair and floatel services. It can be equipped to lay umbilicals and cables and perform well-intervention and hydrate remediation operations. If there is a MPSV job needed in the Gulf, she can do it.”

The vessel is a Jones Act-compliant 327 ft x 73 ft x 29 ft MPSV, equipped with a 250-ton knuckle boom, heave compensated crane with 4,000 ft of wire. The crane’s winch is below deck, expanding her lifting capacity and enabling loads of 107 metric tons to be delivered to water depths of 12,000 ft.