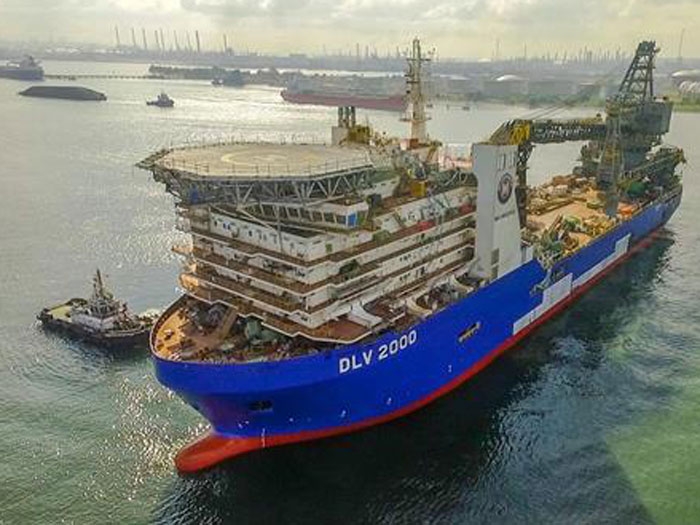 DLV 2000 moves away from its berth at the Keppel Singmarine Shipyard in Singapore on Tuesday, February 16

The DLV 2000 is a DP 3 class dynamically positioned vessel combining a 2,200-ton revolving crane with a deepwater S-lay pipelay system configured to install pipelines with diameters ranging from 4.5 to 60 inches in water depths up to 10,000 ft.

The vessel can accommodate up to 400 people to facilitate large hook-up and commissioning projects and has a 43,000 sq. ft. open deck to allow the transportation and assembly of large subsea structures; enabling safe and efficient stand-alone operations in remote areas.

The vessel has also been designed and constructed to accommodate a deepwater, 500-ton flexlay system that can be installed, at a future date, in response to specific market needs.

With a maximum transit speed of 13.5 knots, the DLV 2000 will be deployed as a global asset within the McDermott fleet.

“Fast, powerful and versatile, the DLV 2000 gives McDermott the capabilities to undertake projects that will expand our portfolio of target markets,” said David Dickson, McDermott’s President and CEO. “As the new flagship of our fleet, this will allow McDermott to utilize one vessel on projects requiring a combination of pipelay, heavy lift and offshore workforce accommodation that would normally have to be executed by multiple vessels. We also expect the DLV 2000 to provide McDermott with a key asset for field development in remote locations through the combination of these versatile construction capabilities and fast transit speed.”