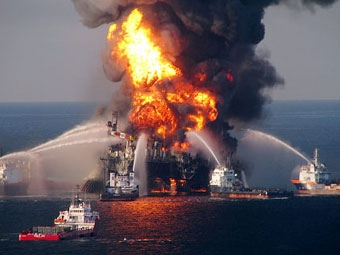 SEPTEMBER 5, 2014 — BP was grossly negligent in the 2010 Deepwater Horizon disaster, U.S. District Judge Carl Barbier ruled yesterday in New Orleans. The finding of gross negligence rather than simple negligence means that BP could face a penalty of up to $4,300 for each barrel of oil spilled in the disaster — a potential liability of up to $18 billion, according to analysts.

“The Court concludes that the discharge of oil ‘was the result of gross negligence or wilful misconduct’ by BP,” Judge Barbier said in his written ruling. “BP’s conduct was reckless.”

All three companies issued statements yesterday. BP said it would immediately appeal the decision. Transocean called it “a welcome and favorable ruling.” Halliburton said it was “pleased” with the ruling.

BP believes that the finding that it was grossly negligent with respect to the accident and that its activities at the Macondo well amounted to willful misconduct is not supported by the evidence at trial. The law is clear that proving gross negligence is a very high bar that was not met in this case. BP believes that an impartial view of the record does not support the erroneous conclusion reached by the District Court.

The Court has not yet ruled on the number of barrels spilled and no penalty has yet been determined. The District Court will hold additional proceedings, which are currently scheduled to begin in January 2015, to consider the application of statutory penalty factors in assessing a per-barrel Clean Water Act penalty. The Clean Water Act requires the District Court to consider a number of factors in determining an appropriate penalty. The statutory maximum penalty is $1,100 per barrel where the court finds simple negligence and $4,300 per barrel where the court finds gross negligence or willful misconduct. During the penalty proceedings, BP will seek to show that its conduct merits a penalty that is less than the applicable maximum after application of the statutory factors.

BP is reviewing the decision and will issue a further statement as soon as possible.

Transocean Ltd. (NYSE: RIG) (SIX: RIGN) today announced that it received a decision by the United States District Court for the Eastern District of Louisiana on phase one of litigation related to the April 20, 2010 Macondo well incident involving the Deepwater Horizon. Key findings in the Court’s decision with respect to Transocean are as follows:

Contractual indemnity: The Court found that BP’s contractual agreement to indemnify Transocean for compensatory damages is valid and enforceable.

Although the decision is subject to appeal, as written it effectively eliminates Transocean’s financial risk arising from the below-surface discharge of oil at Macondo. Transocean’s remaining financial risk is for above-surface discharge of pollutants, if any, occurring during the initial two days of the spill. Transocean believes any such pollution either caused no significant harm or is covered by BP’s indemnity.

“This is a favorable and welcome ruling for Transocean, its employees, and all offshore drilling contractors, as the Court has again ratified the industry-standard allocation of liability between drilling contractors and the owners and operators of oil wells,” said Steven Newman, President and Chief Executive Officer. “As we remember the 11 men who died in this tragic accident, we appreciate the Court’s observation that the Deepwater Horizon crew was attentive and serious and acted bravely in the face of chaotic circumstances, committing multiple heroic acts that saved many lives on April 20, 2010.”

Halliburton (NYSE: HAL) today said that the United States District Court for the Eastern District of Louisiana ruled that Halliburton was negligent in its conduct related to the April 20, 2010 Macondo well incident in the Gulf of Mexico. The Court allocated 3 percent of the fault to Halliburton with the remaining fault allocated to other parties involved. Further, the Court did not find that Halliburton’s conduct constituted gross negligence.

Halliburton is pleased with today’s ruling, which, coupled with our earlier announced settlement with the plaintiffs’ class, means the Macondo case is essentially over for Halliburton.

The Court also held that, pursuant to the parties’ contract, BP must indemnify and release Halliburton with respect to compensatory damages claims. In addition, the lack of a gross negligence finding against Halliburton should resolve all remaining punitive damages claims against the company. Halliburton is continuing to evaluate the various aspects of the rulings and will act appropriately to defend its interests in any further proceedings.

Halliburton previously announced that it has reached an agreement to settle punitive damages claims against Halliburton by a class of plaintiffs who allege damages to property or associated with the commercial fishing industry arising from the Deepwater Horizon incident, and claims against Halliburton that BP assigned to the settlement class in BP’s April 2012 settlement. The approximately $1.1 billion settlement, which includes legal fees, is subject to approval by the United States District Court for the Eastern District of Louisiana, and will be paid into a trust until all appeals have been resolved in three installments over the next two years. The company’s previously accrued loss contingency provision relating to the multi-district litigation proceedings is currently $1.3 billion.