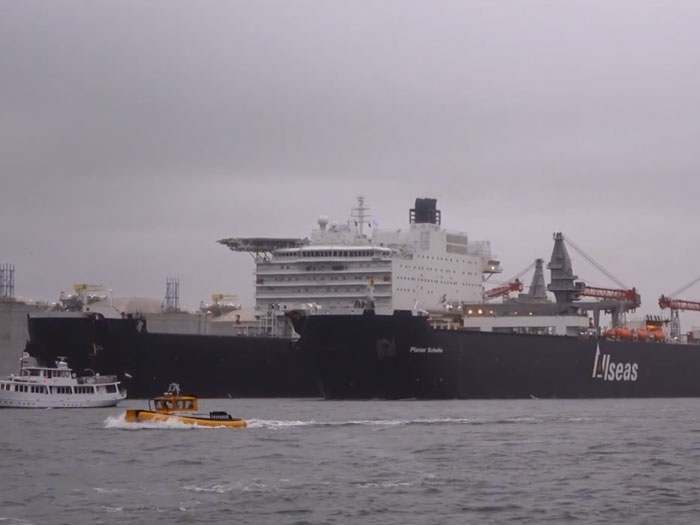 Giant ship arrived in Rotterdam as Pieter Schelte, but will leave as Pioneering Spirit

FEBRUARY 10, 2015 — File this under “what took them so long?”  Yielding to growing pressure, Switzerland headquartered Allseas is to rename the world’s largest ship. The 328 m x 124 m  platform installation, decommissioning and pipelay vessel will now be called Pioneering Spirit, instead of Pieter Schelte.

Allseas president Edward Heerema had named the ship for his father, Pieter Schelte Heerema, to honor his accomplishments as a marine engineer and offshore pioneer. Unfortunately, Piete Schelte is somewhat better known for his checkered World War II career that included service in a Dutch Waffen SS unit.

Though the name of the ship attracted controversy from the day it was announced, outrage has been growing since its arrival last month in the Netherlands where it is being fitted with its main mission equipment ready for final testing before becoming operational (see earlier story).

What seems to have succeeded is pressure from Shell. Its decision to use the ship for decommissioning of the Brent Field in the U.K. sector of the North Sea, which led critics to call the use of a ship named for a former Waffen SS officer “a bloodstain on the name of Royal Dutch Shell.

“Shell believes that the name of the vessel is inappropriate. We have raised our concerns with Allseas and asked them to consider changing the name,” the oil giant told the FT newspaper.

Friday, Allseas said the name of the ship would be changed. Yesterday it announced that the new name will be Pioneering Spirit.

“The name of the vessel reflects what she stands for: a new technological step in platform installation and decommissioning,” said the company. “It also fits the 30-year tradition of Allseas to pioneer and surpass technical boundaries, as was done over the years introducing pipelay on dynamic positioning and laying pipelines in ever deeper waters. This vessel encompasses all innovations that have been developed by Allseas over the last 30 years.”