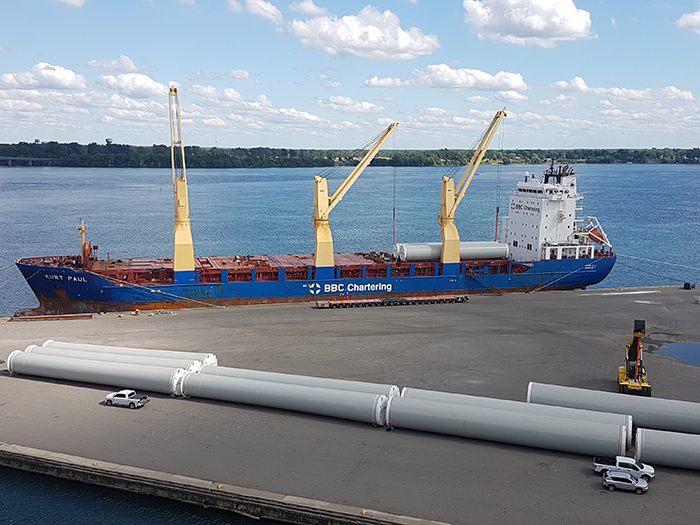 The Ontario, Canada, Port of Johnstown will be busy over the next several months as vessels deliver Enercon turbine components for the Nation Rise Wind Farm project. The cargo represents a major business win for the port, which completed a multi-million-dollar infrastructure project in 2016 that included several acres of laydown space to be able to accommodate this type of heavy-lift cargo.

The first vessel, the BBC Kurt Paul, arrived August 13, 2019. In total, 12 vessels are expected to arrive over a 10 to 12 week period to deliver the components for this wind energy project. Located approximately 40 kilometers southeast of Ottawa, Ontario near the South Nation River, the Nation Rise Wind Farm features 29 Enercon wind turbines and is situated in the municipality of North Stormont within the United Counties of Stormont, Dundas and Glengarry. Logistec has been contracted to move the components from the vessels onto the dock while Bellemare transportation has been hired to transport the components to the construction site.

Robert Dalley, General Manager, for the Port of Johnstown said: “This is a proud day for our entire community, and we are extremely excited to see the project components arriving here in Johnstown. It is very gratifying to see our vision come true and to see all our hard work and effort paying off.

Owned and operated by the Township of Edwardsburgh Cardinal, the Port of Johnstown is a strategically located inter-modal port on the St. Lawrence Seaway. The port serves a region extending from Port Hope to Peterborough, to Pembroke, to the Pontiac Region of Quebec. It moves more than 1.2 million metric tons of cargo annually by ship, rail and truck, connecting businesses to markets across North America and around the world

Edwardsburgh Cardinal Mayor Pat Sayeau said: “For the past two years, the port has really started to reap the rewards of investing in its infrastructure with a number of new business wins. Earlier this month, the port was awarded a further $4.8 million from the federal government for upgrades that will also improve the efficiency of grain exports for the region’s farmers. The port is integral to the success of our local and regional economies.”