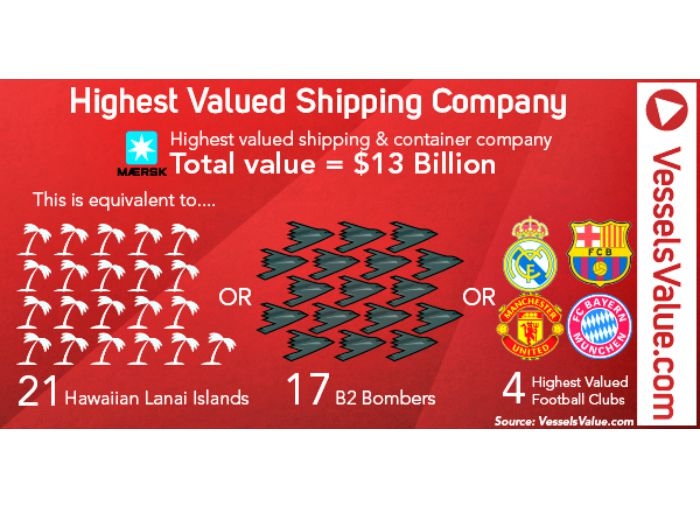 AUGUST 9, 2015—So who is the highest valued company in shipping? VesselsValue.com puts shipping and container giant A.P. Møller Maersk as the top dog with a valuation of about $13 billion, with 262 vessels owned.

In the accompanying infographic, VesselsValue.com says—tongue in cheek—that that is equivalent to 21 Hawaiian Lanai Islands or 17 B2 bombers or four of the highest priced European football clubs—Manchester United, FC Bayern Munchen, FC Barcelona, and Real Madrid (Click on the accompanying graphic to enlarge).

Overall, Maersk Line, which is part of the Maersk Group,operates a fleet of 600 vessels (including those it charters) and had revenues of $27.3 billion in 2014 and profits of $2.3 billion.

The Top Five Highest Value Shipping Companies in order are:

The valuations are based on number of vessels purely owned, not chartered in, and calculated on a daily basis.

While impressive, the $13 billion valuation for A.P. Møller Maersk pales in comparison to the highest cap companies in the world—Apple, with a valuation of  $740 billion, or Google at $478 billion. Heck, even Netflix, with its movie and TV streaming service has a market cap of $49 billion.