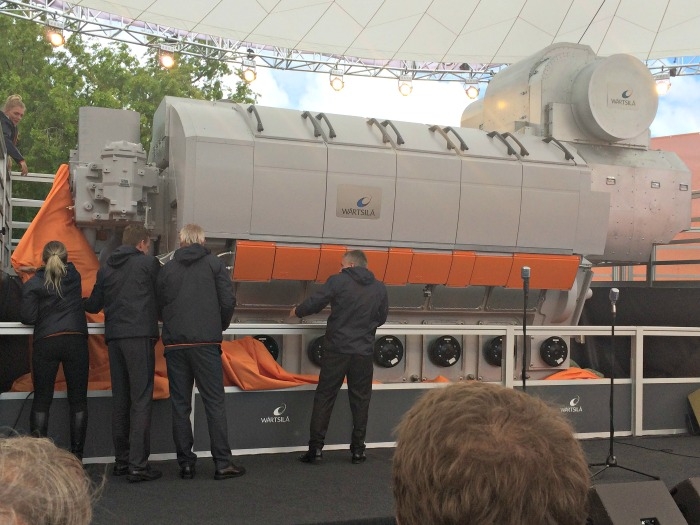 JUNE 2, 2015—Today, Wärtsilä literally pulled the wraps off of a brand new four-stroke engine at an open air unveiling ceremony held in Aker Brygge in Oslo, Norway in conjunction with the Nor-Shipping 2015 exhibition. The engine was immediately bestowed with honors and high praise as it was recognized by the Guinness Book of World Records under a new category as the Most Fuel Efficient Four-Stroke Diesel Engine.

After helping pull off a giant orange tarp covering the engine, Wärtsilä President and CEO Björn Rosengren said the Wärtsilä 31 was the company’s first engine to be designed in a full digital environment, and was built on a modular concept, enabling it to be offered in a number of cylinder configurations and operate on different fuels.

For its record setting achievement, Wärtsilä 31 engine’s fuel consumption efficiency in its diesel version is as low as 165g/kWh.

Although the first Wärtsilä 31 engines are expected to be installed in a BOA Offshore newbuild being built by Noryards AS, it is suitable for a variety of offshore service vessels, cruise ships, ferries, small and medium tankers, bulk carriers, and container ships requiring main engine propulsion in the 4.2 to 9.8 MW power range. The engine is also available in diesel, dual fuel, and spark-ignited gas configurations, meaning operators can burn very light to very heavy diesel and a range of different qualities of gas.

The Wärtsilä 31 is available in 8V, 10V, 12V, 14V and 16V cylinder configurations. Among the many features of this engine are the latest developments in fuel injection systems, engine control systems, and charge air technologies. It is available for applications in mechanical drive installations, for producing electricity when coupled with a generator, for hybrid installations, as well as heavy-duty installations or as an auxiliary engine.