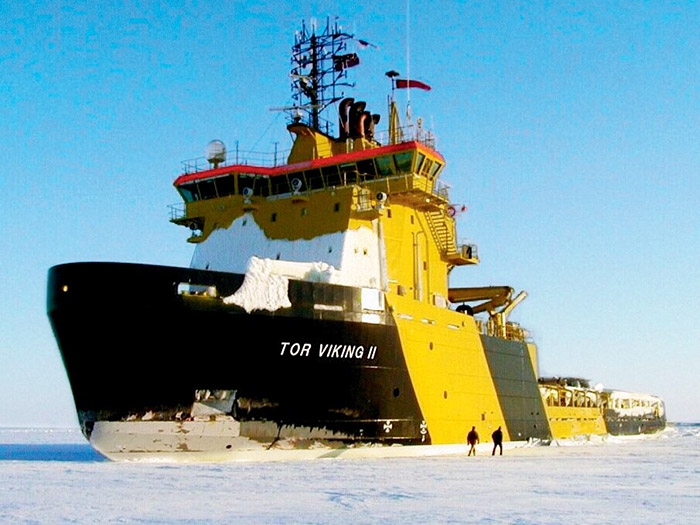 AUGUST 13, 2018 — Confirming the identities of the three vessels that Chantier Davie, Lévis, Quebec, is to convert to icebreakers for the Canadian Coast Guard (see earlier story) Viking Supply Ships AS, a wholly owned subsidiary of Sweden’s Viking Supply Ships AB (VSS) said today that it has sold its three icebreakers, Tor Viking, Balder Viking and Vidar Viking to Her Majesty the Queen in Right of Canada.

In its fleet listings, Viking Supply Ships describes each of the ships as “Combined AHTS & Ice-breaker with DNV Ice-10 notation. Capable of operations in harsh environment offshore regions and Arctic/Sub-Arctic regions.”

Impact on net result of the sale is estimated at $274 million and will be booked in Q3. The transaction is expected to close by the end of August.

VSS will report a first half-year net result of a loss of $40 million, consisting of a loss from the sale of three PSV’s of $12 million, write down of book values of the remaining two PSV’s of $8 million and an operating loss of $20 million.

“The offshore supply market was very disappointing throughout the first half year, and the very weak market has caused both fixture rates and utilization to remain on unsatisfactory levels,” says the company;

In addition, the company expects to book a loss of approximately $18 million in relation to the planned sale of Odin Viking, which is expected to be booked in Q3 or Q4. No contract has as of yet been entered into. We expect a continued weak market and an operating loss also for the second half of 2018.

Following the transactions noted above, VSS fleet will consist of three Ice-1A and one Ice-1A Super classed AHTS´, one regular AHTS (Odin Viking) and two PSV´s, of which the latter three vessels are actively marketed for sale.

VSS says it will maintain its core competence operating in harsh environment, and through the contract with the Swedish Maritime Authority, VSS will also maintain its icebreaking competence.