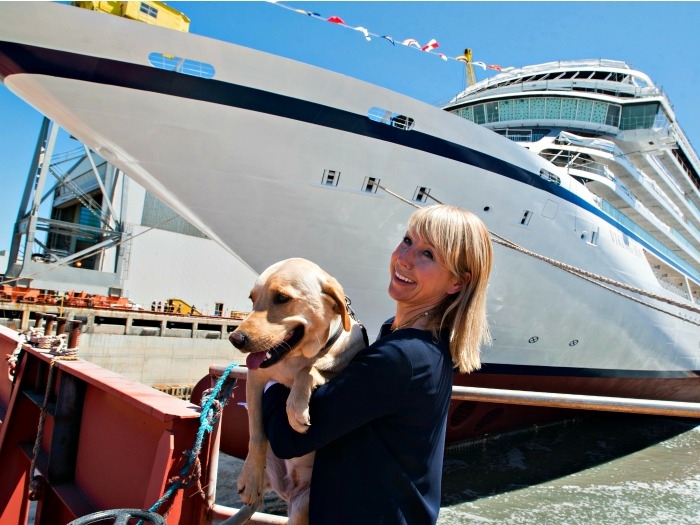 Karine Hagen, Viking Ocean's Senior Vice President of Product, author of a series of children's books and godmother for the Viking Sea, with her yellow lab Finse at the floating out ceremony

JUNE 27, 2015—Viking Ocean Cruises’ second ship—the 930-passenger Viking Sea—was “floated out” at traditional ceremony on June 25, at Fincantieri’s Ancona shipyard in Italy—little more than a month after the new ocean line christened its first ship, Viking Star, in Bergen, Norway. Viking Sea is set to launch in early 2016; the company’s third ship on order, Viking Sky, is also currently under construction in Ancona and will debut in 2017. As a response to strong demand for Viking’s immersive itineraries, all three ships will sail popular routes in Scandinavia and the Baltic; and the Western and Eastern Mediterranean.

“The day that a new ship first touches water is always a special day, and today is indeed a proud one for our Viking family,” said Torstein Hagen, founder and chairman of Viking Cruises. “Having just celebrated the launch of our first ocean cruise ship, we are pleased at the positive reviews she is receiving from our guests and travel industry partners. We have no doubt that her sister ship, Viking Sea, will be met with the same reception upon her debut next spring.”

In addition to the float out of Viking Sea, the company also announced that Karine Hagen, Viking’s senior vice president of product and daughter of Torstein Hagen, will be godmother to Viking Sea and will officially “name” the ship during the christening ceremony in early 2016. Widely recognized as the face of the brand in Viking’s television ads and online cultural enrichment videos, Karine is responsible for infusing the company’s itineraries with extraordinary experiences. She is also the author of the children’s books, “The World of Finse,” an educational series that showcases the adventures of Karine’s yellow Labrador, Finse, set largely along the global destinations and routes of Viking’s cruise itineraries.

“Viking Sea is a magnificent ship, and I am very honored to be her godmother,” Karine said at the ceremony. “It has been a great pleasure to meet so many of the Fincantieri Ancona shipyard staff today, and share the pride in their work.”

A float out ceremony is significant because it denotes a ship moving into its final stage of construction. Viking Sea’s float out began at approximately 10:30 a.m. local time, with the maritime tradition of welding coins under the ship mast. Karine welded Norwegian commemorative coins representing four generations of birth years in her family: 1911 (grandmother Ragnhild, after whom the onboard restaurant Mamsen’s is named); 1943 (father Torstein, Viking’s chairman); 1970 (Karine’s own birth year) and 2012 (Karine’s Labrador, Finse, who was also present at the ceremony). Karine then cut a cord to allow water to begin flowing into the ship’s building dock. Following a two-day process that will set Viking Sea afloat, she will then be moved to a nearby outfitting dock for final construction and interior build-out.

Viking developed its ocean cruises by leveraging extensive feedback and input from VikingRiver Cruises® passengers, and with experienced travelers in mind. Itineraries are designed for maximum time in port, often with late evenings or overnights, so guests can experience local nightlife or evening performances. Ports include both cosmopolitan cities and “collector ports,” and appeal to those with an interest in history, art and culture. In addition, Viking Inclusive Cruising provides unparalleled value—with every cruise fare including a veranda stateroom, shore excursions in each port of call, all onboard meals, and all port charges and government taxes. Guests also enjoy many complimentary amenities as part of their fare, including: beer and wine with lunch and dinner service; Wi-Fi; self-service laundry; access to the Thermal Suite in the LivNordic Spa; and 24-hour room service—a value of more than $2,400 per couple for an average cruise.

Viking’s ocean ships are engineered at a scale that allows direct access into most ports, so guests have easy and efficient embarkation and disembarkation. Classified by Cruise Critic as “small ships,” Viking’s ocean fleet features understated elegance and modern Scandinavian design. Highlights include: