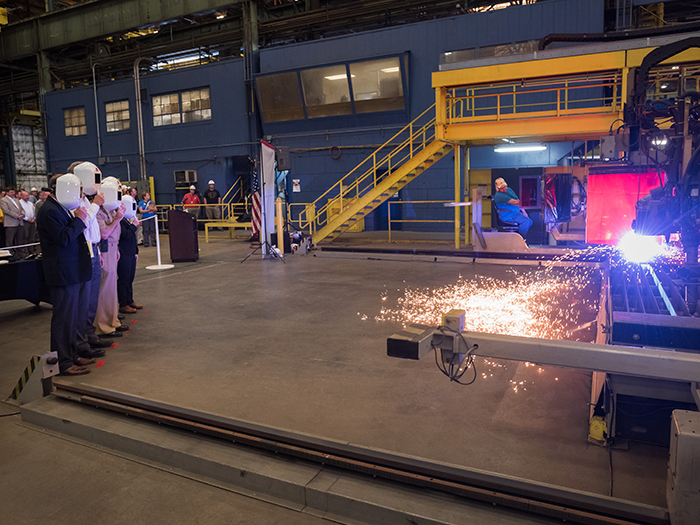 With the press of a button, a plasma-burning machine cut the first steel plate that will be used to build the lead vessel, Columbia (SSBN 826).

The event also marked a further step in Newport News’ digital transformation. The Columbia class boats are the first class of submarines that will be built using fully digital blueprints.

“Today is a historic day,” said Jason Ward, Newport News’ vice president for Columbia-class construction. “It has been a half century since Newport News Shipbuilding has constructed a ballistic submarine. Today, we celebrate the decade-plus effort spent working with Electric Boat on the design of this new class of submarine as we formally transition from design to material procurement and now to construction execution.”

Newport News is a major contractor and shipbuilding partner in the Columbia-class program and is performing advance construction activities under a contract the shipyard received from General Dynamics Electric Boat.

The Columbia-class boats will replace the fleet of Ohio-class nuclear ballistic submarines. Newport News is starting its work three weeks ahead of schedule to support its advance construction efforts.

Construction of the 12-boat Columbia class will take place in Virginia, Rhode Island and Connecticut, with Electric Boat assembling and delivering all of the submarines. The lead boat is scheduled to be delivered to the Navy in 2027.