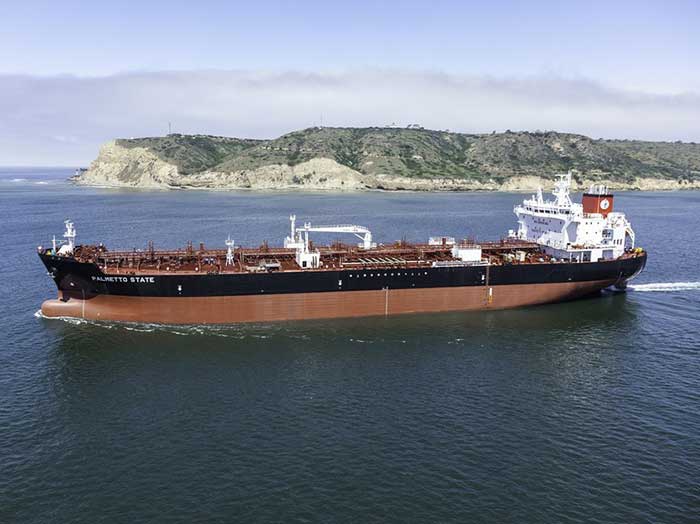 The ship, Palmetto State, was delivered to Kinder Morgan subsidiary American Petroleum Tankers (APT) during a signing ceremony at the NASSCO shipyard in San Diego.

In 2013, NASSCO entered into agreements with two companies, APT and SEA-Vista, LLC, to design and construct a total of eight 610-foot-long, 50,000 dwt, LNG-conversion-ready product tankers to include a 330,000 barrel cargo capacity each.

According to NASSCO, Palmetto State and its sister ships are the most environmentally friendly tankers to enter the Jones Act trade. The tankers’ ECO design gives a 33 percent increased fuel efficiency and a corresponding reduction in ship emissions.

In just under three years, NASSCO shipbuilders constructed and delivered all eight ECO tankers. During this time, the company achieved several first-time milestones, including a record throughput of 60,000 tons of steel per year and the delivery of six ships in 2016.

“The ECO Class tanker program pushed us to develop more efficient planning and production techniques, and fundamentally improved the way we perform every day,” said Kevin Graney, president of General Dynamics NASSCO. “I credit the success of this program to the thousands of hardworking men and women who contributed to the design, construction and delivery of these ships. Their dedication to continuous improvement was demonstrated by the hull-to-hull learning we saw over the course of the ECO Class program. I also thank American Petroleum Tankers and SEA-Vista, LLC for their partnership and confidence in NASSCO.”

NASSCO is the only major shipyard on the West Coast of the United States conducting design, construction and repair of both commercial and U.S. Navy ships. In the past decade, NASSCO delivered more than 30 ocean-going ships to government and commercial customers—including the world’s first LNG-fueled containerships.