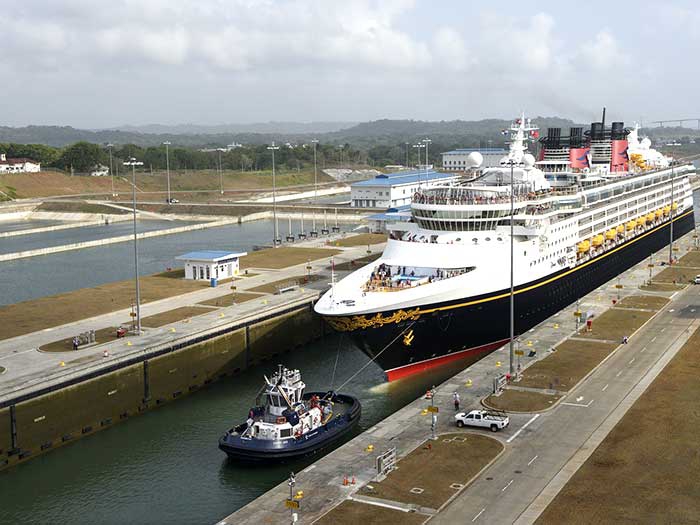 MAY 1, 2017 — The Disney Wonder transited the Panama Canal April 29, becoming the first passenger vessel to go through the canal’s new set of locks, marking a milestone for the cruise industry.

Originally delivered from the Fincantieri Marghera shipyard in 1999, the ship underwent a major refurbishment at Navantia in Spain last year that saw passenger capacity expanded from 2,400 to 2,713 and addition of a ducktail for stability that extended its length by 20 ft to 984 feet.

The Disney Wonder Panama Canal crossing is part of a 14-night voyage from Port Canaveral, Fla., to San Diego, where the ship will sail cruises to Baja, Mexico, before a summer season from Vancouver to Alaska.

The Panama Canal Authority began accepting booking requests for passenger vessels in the new locks on April 1. So far, 18 reservations have already been made for passenger vessels to transit the Expanded Canal for the 2017-2018 season, a number that is expected to increase in the coming months.

“The original Panama Canal has been a cruise destination for many years,” said Panama Canal Deputy Administrator Manuel Benitez. “Today’s historic transit marks the beginning of cruise lines being able to include the new locks as part of their itineraries, opening up additional transit options and allowing cruise passengers to witness first-hand this feat of modern engineering.”