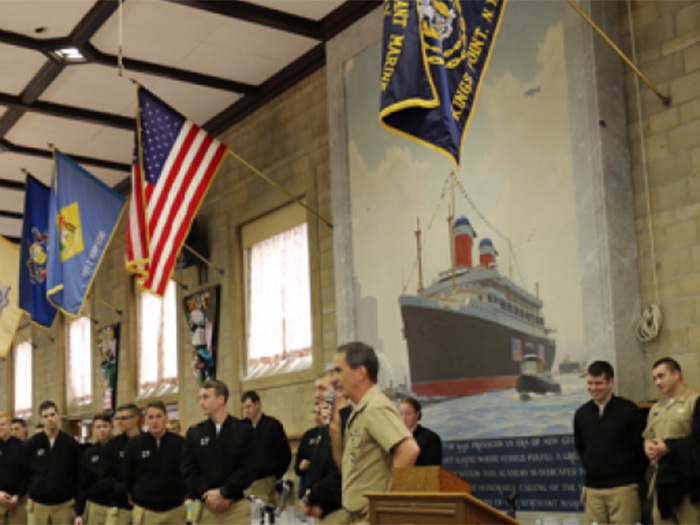 The announcement comes a little more than two weeks after the swearing in of Elaine Chao as Secretary of Transportation, and the USMMA Alumni Association and Foundation apparently believes that Secretary Chao has played a key role in restoring the Sea Year program.

Capt. James Tobin, President of Alumni Association and Foundation (AAF) said,”This announcement is a very significant step toward the full restoration of Sea Year on commercial ships, and we are most grateful to Secretary Chao for recognizing the continuing need for this mission-critical training.”

While today’s action will make it possible for many midshipmen to obtain the statutory required number of days at sea, noted the AAF, the swift approval of other shipping companies is essential if all current midshipmen are to enter the workforce as expertly-trained mariners.

“Until there is an available berth for every midshipman to train aboard commercial vessels, the Academy will continue to fall short in meeting its mission,” said Captain Tobin. “We nevertheless applaud Secretary Chao’s decisive action, and we look forward to working with the Academy, Maritime Administration and Department of Transportation to ensure we meet the ultimate goal of full restoration in a timely manner.”

The Academy’s announcement said that the reinstatement of the program follows the implementation of comprehensive new policies, including a zero tolerance policy for sexual assault and sexual harassment to ensure that the Academy’s standards for behavior, leadership and integrity are upheld.

“I commend the maritime industry’s efforts to combat sexual assault, sexual harassment and other coercive behaviors, particularly Crowley, Maersk and APL, which are the first companies to meet MARAD’s Sea Year requirements,” said Maritime Administration Executive Director Joel Szabat. “Commercial Sea Year training is a core training component of the Academy and its Midshipmen, and critical to the success of the industry, as today’s Midshipmen are tomorrow’s operators.”

By order of then-Secretary Foxx, Midshipmen training on commercial vessels was suspended in June 2016, while the Maritime Administration, industry and labor examined ways to ensure that training was conducted in a safe and respectful environment.

A consortium of maritime industry companies and labor organizations is working with MARAD to develop computer based training programs and best practices to combat SASH. In addition, the National Defense Authorization Act for fiscal year 2017 requires a working group to report to Congress in September 2017 on efforts to further address SASH prevention and reporting.

In addition to the initial three shipping lines, MARAD is reviewing applications from other companies that have applied to meet the Sea Year requirements.