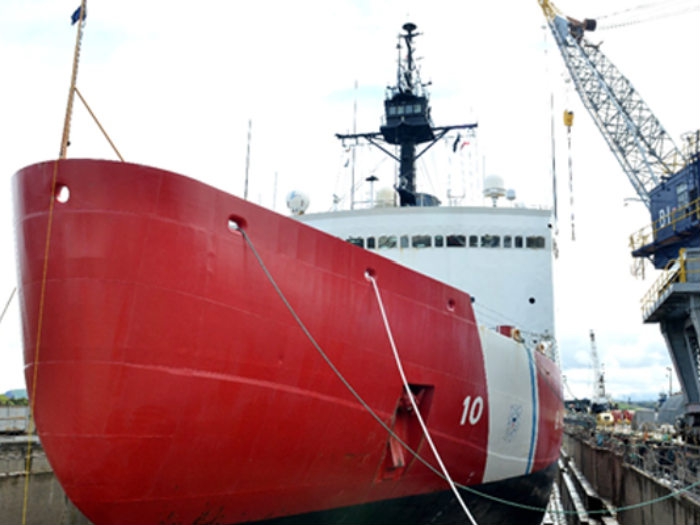 Polar Star in drydock for repairs in April 2018

JULY 22, 2018 —Looking to squeeze a bit more life out of its only active heavy polar icebreaker, the U.S. Coast Guard released a request for information (RFI) on July 18 to gather market research for the Service Life Extension Project (SLEP) for the 42-year-old USCGC Polar Star. The SLEP would be performed as part of the Coast Guard’s In-Service Vessel Sustainment (ISVS) Program. The work would allow the icebreaker to perform its mission until a replacement is procured.

The SLEP effort will recapitalize a number of major systems on board the Polar Star — including machinery control and propulsion power distribution systems — and extend its service life by four years. The work will include a six-month long lead time material procurement and detailed design phase, followed by a minimum of three annual repair execution phases between 2021 and 2024.

Commissioned in 1976 and homeported in Seattle, the 399 ft x 83 ft 7 in Polar Star is currently responsible for nine of the 11 Coast Guard statutory missions. Each winter, the Polar Star travels to McMurdo Station in Antarctica as part of Operation Deep Freeze, which supports the National Science Foundation-managed U.S. Antarctic Program.

“The SLEP for Polar Star is essential to maintain year-round access to the polar regions until new heavy polar icebreakers are delivered,” says Ken King, program manager for the ISVS program. “The challenge for this program will be to balance phased SLEP work with continued Polar Star operational deployments.”