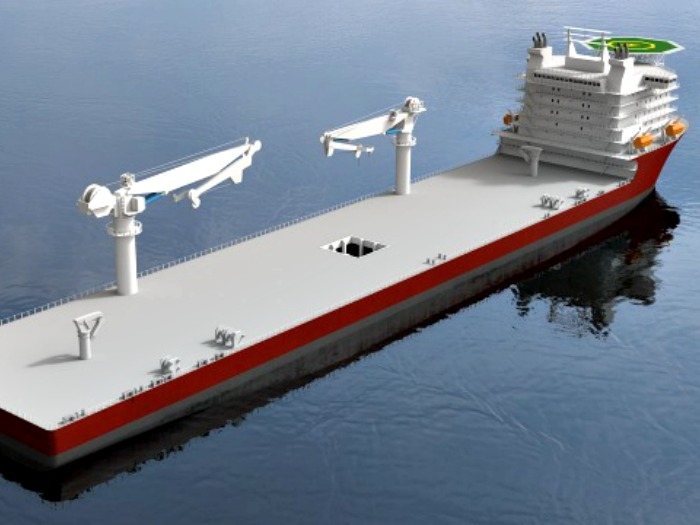 Computer rendition of the bareboat of Nautilus vessel

NOVEMBER 6, 2014—Undersea miner Nautilus Minerals Inc. (TSX:NUS, OTCQX: NUSMF) will charter a vessel to be first deployed for use at the Solwara 1 Project in the territorial waters of Papua New Guinea, where it is aiming to produce copper, gold and silver.

Dubai-based Marine Assets Corporation (MAC) will own and manage the vessel, which will be built by China’s Fujian Mawei Shipbuilding Ltd.

The newbuild will be chartered to Nautilus for a minimum period of five years at a rate of US$199,910 per day, with options to either extend the charter or purchase the vessel at the end of the five-year period.

MAC is best known for its CSS (Compact Semi Submersible) vessels, all of which have been built at Fujian Mawei. However, Nautilus Minerals provided few details about the new vessel other than that it will measure 227 m in length and 40 m in width, with accommodations for up to 180 people and will generate about 31 MW of power. All of the below deck mining equipment will be installed in the vessel during the build process to minimize the equipment integration to be completed following delivery of the vessel. The vessel is expected to be delivered by the shipyard at the end of 2017.

The vessel will first serve as the operational base for the joint venture (Solwara 1 JV) to be formed by Nautilus and the Independent State of Papua New Guinea’s nominee, Eda Kopa (Solwara) Limited, a wholly owned subsidiary of Petromin PNG Holdings Limited, to support the operations carried out by the Solwara 1 JV to extract and to transport high grade copper and gold material from the project site, in the Bismarck Sea of Papua New Guinea.

Under the terms of the arrangement, MAC will enter into a contract with Fujian Mawei to design and construct the vessel in accordance with Nautilus’ specifications. The shipbuilding contract is expected to be signed by no later than November 28, 2014. A $10 million deposit is payable by Nautilus to MAC following the payment by MAC of the first installment under the shipbuilding contract. A further charterer’s guarantee of $18 million will be provided to MAC by the Solwara 1 JV on the commencement of the charter of the vessel.

Mike Johnston, Nautilus’ CEO, commented “We are excited to achieve this significant milestone and secure a vessel contract with such an experienced vessel provider as MAC. We appreciate the continued support we have received from Eda Kopa, our joint venture partner, in reaching this milestone and, together with them, look forward to working with MAC and the shipyard in seeing the delivery of our first vessel and making seafloor mining a reality.”