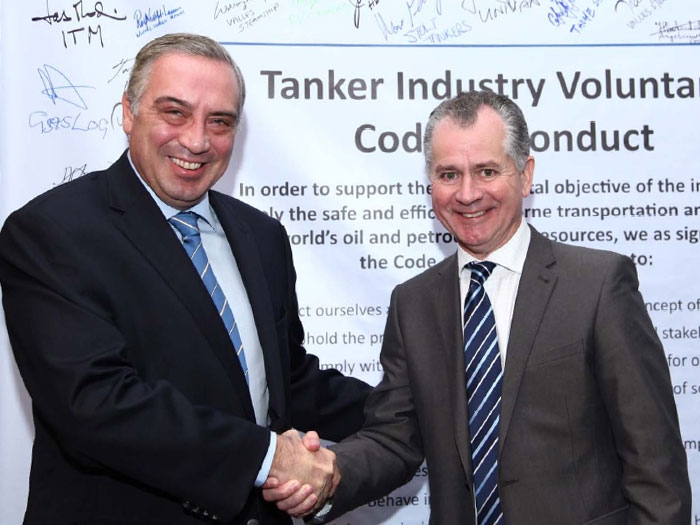 NOVEMBER 14, 2014 — Intertanko’s Council of Members met this week in Dubai and elected Nikolas Tsakos as Chairman of the association.

Mr.Tsakos has been a member of Council since 2002 and Vice Chairman since 2012. He succeeds Graham Westgarth, who stepped down after five years in the chair.

“The last five years of leading the independent tanker owners have been both rewarding and challenging,” said Mr. Westgarth. “The industry has been through one of the worst recessions in recent history, while at the same time we have had to deal with the scourge of piracy and a plethora of new legislation. This meant that Intertanko had to remain focused on our mission of providing support to our members, being a respected voice in the legislative environment and raising awareness of the importance of shipping to the global economy, while at the same time increasing our emphasis on the commercial sustainability of the industry.”

“I believe that Intertanko has continued to exhibit real leadership in all these areas and is well-placed to deal with the challenges of the future,” he continued. “The selection by Council of Nikolas Tsakos as the next Chairman is an inspired one and I am certain he will continue to lead the organization for the benefit of Intertanko Members and of the tanker industry.”

Nikolas Tsakos, President and Chief Executive of Tsakos Energy Navigation, says he is ready and willing to continue the work started by Graham Westgarth in shifting the focus of Intertanko more towards commercial sustainability while retaining its emphasis on technical and operational issues.

“Graham has been a charismatic leader during the tanker industry’s unprecedented downturn,” said Mr. Tsakos. “I am honored to take over from him at a time when Intertanko’s role in today’s challenging environment is more prominent than ever. Operational excellence and environmental protection together with commercial sustainability will continue to be the association’s main goals.