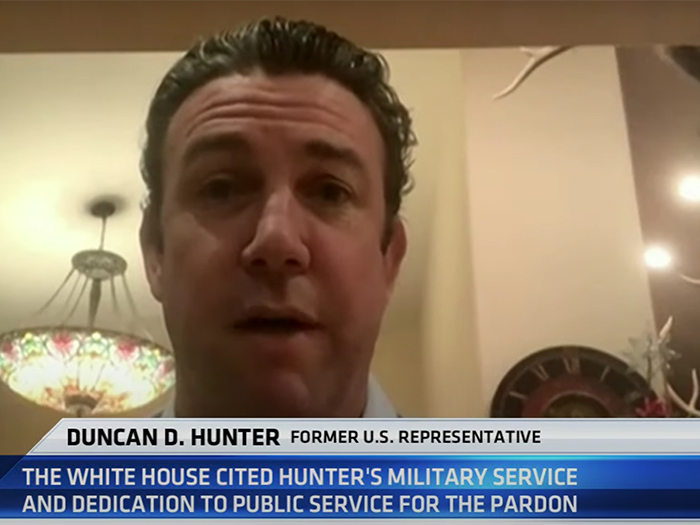 In interview with KUSI News this morning Hunter said pardon “came out of the blue.”

Once he was hailed as a “Champion of Maritime.” Then, in March this year, former Chair of the House Subcommittee on Coast Guard and Marine Transportation, Duncan Hunter was sentenced to 11 months in prison for his admitted role in what the Department of Justice describes “as a years-long conspiracy to knowingly and willfully steal $250,000 in campaign funds that he and his wife used to maintain their lifestyle when their family was otherwise drowning in debt.”

Yesterday, Hunter was the recipient of a full pardon from President Trump.

It wasn’t exactly a “get out of jail free” card because Hunter had not yet started serving his sentence. Although, at the time of sentencing, U.S. District Judge Thomas J. Whelan ordered Hunter to surrender to the Bureau of Prisons by May 29 at noon, yesterday’s White House announcement, the sentence was set to begin January 2021.

Here’s what the announcement said:

“Duncan Hunter – At the request of many Members of Congress, President Trump granted a full pardon to Duncan Hunter. His pardon is also supported by former Commissioner of the Federal Election Commission Bradley Smith.

“Mr. Hunter has dedicated much of his adult life to public service. Mr. Hunter represented California’s 50th Congressional District from 2013 to 2020. Prior to his time in Congress, Mr. Hunter was an officer in the United States Marine Corps. Inspired to enlist after the September 11, 2001 attacks, Mr. Hunter saw combat in both Iraq and Afghanistan.

“In 2019, Mr. Hunter pled guilty to one count of misusing campaign funds, an offense that could have been handled as a civil case via the Federal Election Commission, according to former FEC Commissioner Bradley Smith. He was sentenced to 11 months’ imprisonment set to begin in January 2021.