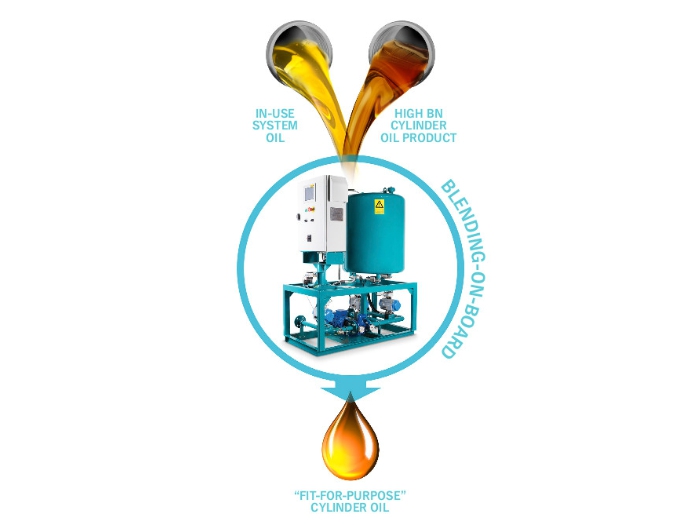 DECEMBER 21, 2017—Greek shipping remains a powerhouse, boasting the world’s largest fleet with some 4,585 ships (over 1,000 grt) representing 342.75 million dwt. Like the rest of the world’s shipowners, Greek ships have had to comply with ever-stricter international and regional emission regulations and the operational challenges of burning ultra low sulfur fuel and slow steaming. Improper attention to engine cylinder lubrication in such changing operating conditions can lead to excessive (and expensive) cylinder oil consumption and cylinder wear, as well as cold corrosion.

Originally developed by Maersk for use on A.P Moller-Maersk Group’s fleet of containerships, MFT’s BOB technology allows for the blending of the in-use system oil, as a base oil, with a high-BN cylinder oil product to produce a Fit-for-Purpose cylinder lubricant and facilitate the addition of fresh system oil to the engine sump. With BOB units on board, ship operators can blend cylinder lubricant compositions that match actual engine operating conditions and fuel sulfur levels. The use of this technology can reduce cylinder oil consumption and alleviate issues such as cold corrosion and excessive cylinder wear. It can also mitigate issues associated with worn system oil causing problems for the hydraulic control system in modern, electronic two-stroke engines.

The SEA-Mate BOB system has obtained letters of no objection from MAN Diesel & Turbo and Winterthur Gas & Diesel (WinGD) engines and is suitable for use on all types of two-stroke engines.

Founded in 1968, Technava is one of the leading companies in the supply, installation and service of equipment on board all types of ships. The company also acts as the representative for leading developer of two-stroke low-speed gas and diesel engines WinGD in Greece and Cyprus. The fact that WinGD is also working cooperatively with MFT, makes the establishment of Technava as the official sales agent for the SEA-Mate BOB system in Greece and Cyprus well positioned.

“Maersk Fluid Technology is honored to be working with Technava for the sales of our SEA-Mate BOB system in Greece and Cyprus. Our Blending-on-Board technology can support Greek and Cypriot ship owners with both changing engine operating conditions and fuel sulfur levels. Therefore, we believe that introducing our Blending-on-Board technology jointly with Technava, will bring great technical and financial value to the Greek and Cypriot marine industry,” says Jens Byrgesen, Managing Director at Maersk Fluid Technology.

Andreas Angelidis, Projects’ Engineer at Technava, says, “As a highly reputed supplier of marine equipment we welcome the opportunity to act as the sales agent for MFT in Greece and Cyprus. We represent first class manufacturers with strong brand names and highly reliable product, so we are proud to welcome the MFT SEA-Mate BOB system into our portfolio of products.”

Maersk Fluid Technology will be exhibiting their BOB technology with Technava during Posidonia 2018.