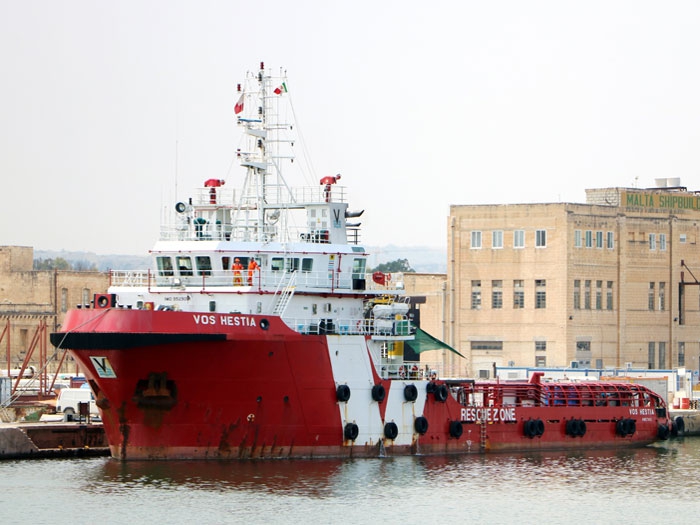 OCTOBER 25, 2016—As a result of the ongoing refugee crisis, more than 3,000 people have drowned this year in the Mediterranean trying to escape from North Africa. That’s an increase of over 40% on the same period last year—including more than 2,700 between North Africa and Italy. The number of children crossing the Mediterranean in 2016 has increased by more than two thirds compared to the same period last year.

It is a daily fact that migrants and refugees are at risk of drowning as they make the perilous journey to Europe. A journey that will only become riskier as winter approaches. But thanks to the work of the charity, Save the Children, together with shipowner Vroon and RINA Services, a specifically dedicated rescue ship has been classified to rescue those that run into difficulty when crossing the Mediterranean.

In 2016, Save the Children began an ambitious project to use a vessel from the Dutch shipowner Vroon to save the lives of refugees should they get into difficulty when crossing the Mediterranean.

International marine regulations state that a ship is to be classified according to her intended service. RINA has introduced in its classification rules the “Rescue” notation for cargo ships dedicated to rescuing refugees.

In specialist search and rescue operations, the rescue capacity of the ship is to be maximized, prioritizing refugees reaching dry land safely rather than standard accommodation.

RINA Services created a set of requirements aimed at maximizing passenger carrying capacities while complying with international regulation. Compliance with these requirements allowed for the Vos Hestia to be classified with the new service notation “Rescue.”

It is highlighted that the notation specifies the maximum number of refugees for which the unit is designed and the indication of the geographical areas, with the maximum distance from the shore, where the rescue operations are intended to be performed.

The Italian Coast Guard has said it greatly appreciates the contribution to search-and-rescue operations offered by aid agencies.

Vos Hestia’s first rescue mission (set off from Augusta on this past July 9) assisted about 300 refugees from Nigeria, Guinea, Cote d’Ivoire, Mali, Ghana, Cameroon, Gambia, Senegal, Burkina Faso, Liberia and Sudan. There were approximately 55 women; four accompanied children; and 60 unaccompanied children, who we believe to be under age of 18, traveling alone, including a 12-year-old boy.

The Vos Hestia has now departed for the second time from Sicily to continue its role in refugee search and rescue coordination.

Michele Francioni, RINA Services’ CEO says, “RINA’s specialists immediately began work on creating requirements applicable to the ship, in order to maximize her passenger carrying capacity while adhering rigorously to safety regulations. The ship Vos Hestia has been refitted to meet the new requirements. As soon as the work was completed, RINA Services were able to classify the vessel for rescue use at sea.”

Vroon too are offering their support to Save the Children. “We recognize the plight facing the refugees and the challenges of the approaching winter season. Nobody wants to see the tragic headlines of last year again and so Vroon was committed to ensuring that this project was advanced as quickly as possible,” says Coco Vroon, Vroon Group Managing Director.

Rob Macgillivray, Save the Children Vos Hestia Head of operations says, “Save the Children has worked at Italian ports for more than eight years, helping keep lone children safe when they arrive on land. We are now extending our operations to help save lives at sea and are proud of our partnership with Vroon which helps us do this.”