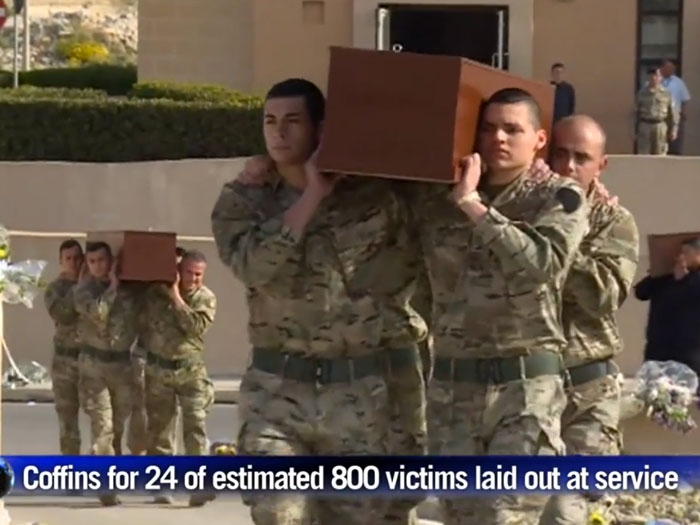 As EU ministers met to discuss their response to the migrant crisis, AFP cameras covered the funeral of 24 of the victims of a capsize that cost 800 lives

APRIL 24, 2015 — With migrant deaths in the Mediterranean soaring,  a special meeting of the European Council yesterday saw ministers pledge that the European Union “will mobilize all efforts at its disposal to prevent further loss of life at sea and to tackle the root causes of the human emergency that we face, in cooperation with the countries of origin and transit.”

The Council met as Malta held a funeral service for the 24 people whose bodies — identified only by number — were the only ones recovered in a migrant boat capsize estimated to have cost 800 lives.

“Our immediate priority is to prevent more people from dying at sea,” said a Council statement that got a tepid welcome from the commercial shipping industry, which has found itself on the frontline of rescue efforts.

Before looking at why the shipping industry has reservations, here’s what the EU ministers committed to:

Strengthening our presence at sea

a) rapidly reinforce EU Operations Triton and Poseidon by at least tripling the financial resources for this purpose in 2015 and 2016 and reinforcing the number of assets, thus allowing to increase the search and rescue possibilities within the mandate of FRONTEX. We welcome the commitments already made by Member States which will allow to reach this objective in the coming weeks;

b) disrupt trafficking networks, bring the perpetrators to justice and seize their assets, through swift action by Member State authorities in co-operation with EUROPOL, FRONTEX, the European Asylum Support Office (EASO) and EUROJUST, as well as through increased intelligence and police-cooperation with third countries;

c) undertake systematic efforts to identify, capture and destroy vessels before they are used by traffickers;

e) use EUROPOL to detect and request removal of internet content used by traffickers to attract migrants and refugees, in accordance with national constitutions;

f) increase support to Tunisia, Egypt, Sudan, Mali and Niger among others, to monitor and control the land borders and routes, building on current CSDP operations in the region, as well as on regional cooperation frameworks (Rabat and Khartoum processes); step up dialogue with the African Union at all levels on all these issues;

g) reinforce our political cooperation with African partners at all levels in order to tackle the cause of illegal migration and combat the smuggling and trafficking of human beings. The EU will raise these issues with the African Union and the key countries concerned, with whom it will propose the holding of a summit in Malta in the coming months;

h) step up cooperation with Turkey in view of the situation in Syria and Iraq;

k) launch Regional Development and Protection programs for North Africa and the Horn of Africa;

l) invite the Commission and the High Representative to mobilize all tools, including through development cooperation and the implementation of EU and national readmission agreements with third countries, to promote readmission of unauthorized economic migrants to countries of origin and transit, working closely with the International Organization for Migration;

m) while respecting the right to seek asylum, set up a new return programme for the rapid return of illegal migrants from frontline Member States, coordinated by FRONTEX;

p) deploy EASO teams in frontline Member States for joint processing of asylum applications, including registration and finger-printing;q) set up a first voluntary pilot project on resettlement across the EU, offering places to persons qualifying for protection.

Leaders of the merchant shipping industry – which in the past 16 months participated in almost 1,000 migrant rescue operations in the Mediterranean – said they welcomed the decision to triple resources of the Triton operation and supported the commitment of EU Member States to deploy additional operational means, including vessels and planes, to achieve this objective at relatively short notice.

“But,” they cautioned, “the fact that operation Triton remains within the mandate of FRONTEX, the EU border agency, raises serious questions about the extent to which these efforts will fully ensure the immediate prevention of further loss of life, which should be the absolute priority.”

In Brussels, Patrick Verhoeven, Secretary General of the European Community Shipowners’ Associations (ECSA) commented: “EU leaders have agreed to increase resources and assets available for search and rescue operations, within the mandate of Frontex. Laudable as these efforts are, they still fall short of the scale and mandate of last year’s Italian operation Mare Nostrum, which saved hundreds of thousands of people in 2014. What is needed immediately is a similar, EU-led, large-scale search and rescue mission, able to operate far from the EU territorial waters, which is where most of the accidents involving migrants take place.”

Commenting on the operational capabilities of Triton, Peter Hinchliffe, Secretary General of the London-based International Chamber of Shipping said: “We understand that the resources of Triton can be deployed in international waters when called upon by national Maritime Rescue Coordination Centers, but it remains highly doubtful whether they can rapidly reach areas near the Libyan coast, where most incidents tend to occur. It seems that merchant ships, which are not best equipped to rescue hundreds of people at a time, will continue to be called upon frequently to respond to requests for assistance. A clear mandate for humanitarian rescue operations by EU States still appears to be outstanding.”