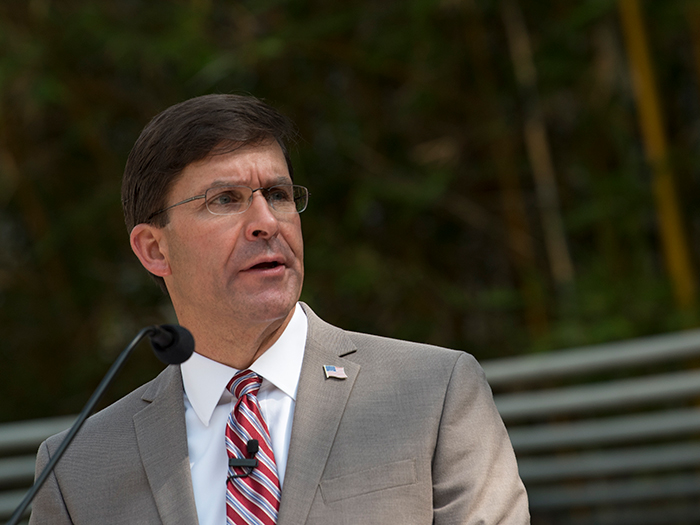 For months now there have been indications that a major rethink of the Navy’s future fleet priorities has been underway – and that it could have far reaching implications for shipbuilders. Yesterday in a wide-ranging address at RAND Corporation, Santa Monica, Calif. , Secretary of Defense Dr. Mark T. Esper gave some insights into what’s in the works. It includes a 355 ship fleet with more and smaller surface combatants; optionally-manned, unmanned, and autonomous surface and subsurface vehicles; unmanned carrier-based aircraft of all types; a larger and more capable submarine force; and a modern strategic deterrent.

After warning of the implications of China’s growing naval ambitions, Secretary Esper said:
“In addition to developing traditional weapons systems, Beijing is also investing in long-range, autonomous, and unmanned submarines, which it believes can be a cost-effective counter to American naval power.”

“Even if we stopped building new ships, it would take the PRC years to close the gap when it comes to our capability on the high seas,” said the Secretary.

Following is extracted from the transcript of his remarks released by the Pentagon:

Ship numbers are important, but they don’t tell the whole story.

They do not address the types of ships and the capabilities of the vessels being counted; the skill of the crews that operate them; the prowess of the officers that lead them; or the ways in which we fight and sustain them…just to name a few.

Nonetheless, we must stay ahead; we must retain our overmatch; and we will keep building modern ships to ensure we remain the world’s greatest Navy.

That said, to compete in a 21st century high-end fight, we will need a future fleet that optimizes the following operational attributes: first, distributed lethality and awareness; second, survivability in a high intensity conflict; third, adaptability for a complex world; fourth, ability to project power, control the seas and demonstrate presence; and fifth, capability to deliver precision effects at very long ranges.

This future naval force will be more balanced in its ability to deliver lethal effects from the air, from the sea, and from under the sea.

This fleet will be made up of more and smaller surface combatants; optionally-manned, unmanned, and autonomous surface and subsurface vehicles; unmanned carrier-based aircraft of all types; a larger and more capable submarine force; and a modern strategic deterrent.

At the same time,this force must be affordable in an era of tight funding; sustainable over the long term; and operationally ready and available at higher rates.

In addition, it must have a robust and healthy industrial base, with modern shipyards and highly skilled workers, which have the capacity to build and maintain the fleet we need.

That is why, earlier this year, I asked the Deputy Secretary of Defense to lead a Future Naval Forces Study, tasked with assessing a wider and more ambitious range of “future fleet” options.

The Navy, Marine Corps, Joint Staff, the Office of the Secretary, as well as outside advisors conducted a comprehensive, cost and threat-informed review and analysis.

First, they examined the naval forces we currently have; second, they explored future force options needed to retain dominance in 2045 given China’s likely modernization plans; and, third, they war gamed these options, assessing the strengths and weaknesses of each combination of ships against different future mission sets.

This week I met with the Deputy Secretary and the Navy/Marine Corps/OSD/Joint Staff team to discuss their findings. The results are a game-changer that reflect a good deal of serious work and effort based on facts and data.

This study will serve as our guidepost as we decide on, program, and build our future fleet, and conduct follow-on assessments in select areas.

In short, it will be a balanced force of over 355 ships – both manned and unmanned – and will be built in a relevant timeframe and budget-informed manner.

And we will build this fleet in such a way that balances tomorrow’s challenges with today’s readiness needs, and does not create a hollow Navy in the process.

To achieve this outcome, we must increase funding for shipbuilding and the readiness that sustains a larger force. Doing this, and finding the money within the Navy budget and elsewhere to make it real, is something both the Navy leadership and I are committed to doing.

As an example of where we are headed, earlier this year, the Navy granted a $795 million contract to purchase the first ship of a new class of guided missile frigates – with an option to purchase nine more totaling nearly $5.6 billion.

This is the first new major shipbuilding program the Navy has sought in more than a decade. These combatants will support the National Defense Strategy across the full range of military operations, with increased lethality, survivability, capability, and capacity to conduct distributed warfare—a key requirement born — borne out by the Future Naval Force study.

As I visit with industry partners over the next few days, I will learn more about the Navy’s latest transformational pursuits – unmanned surface vessels and unmanned undersea vehicles.

We are making solid progress on these fronts.

Earlier this month, for example, the Sea Hunter prototype completed operations with the USS Russell, demonstrating various aspects of manned and unmanned teaming.

We are planning on-going training events to continue developing tactics, techniques, and procedures for these platforms. These efforts are the next step in realizing our future fleet, one in which unmanned systems perform a variety of warfighting functions, from delivering lethal fires and laying mines, to conducting resupply or surveilling the enemy. This will be a major shift in how we will conduct naval warfare in the years and decades to come.

Finally, this future Navy and Marine Corps will employ novel concepts such as “Distributed Maritime Operations” and “Littoral Operations In A Contested Environment,” which will modernize the way we fight as they enable our future Joint Warfighting doctrine.

On shipbuilding, the Secretary said:

“To our private sector partners, particularly in shipbuilding, we must continue to work together to promote a robust and healthy industrial base with modern shipyards, infrastructure, and highly skilled workers. We will need your help to match our level of ambition for new capabilities and more capacity in the coming years, with innovation that performs on cost and on schedule.”