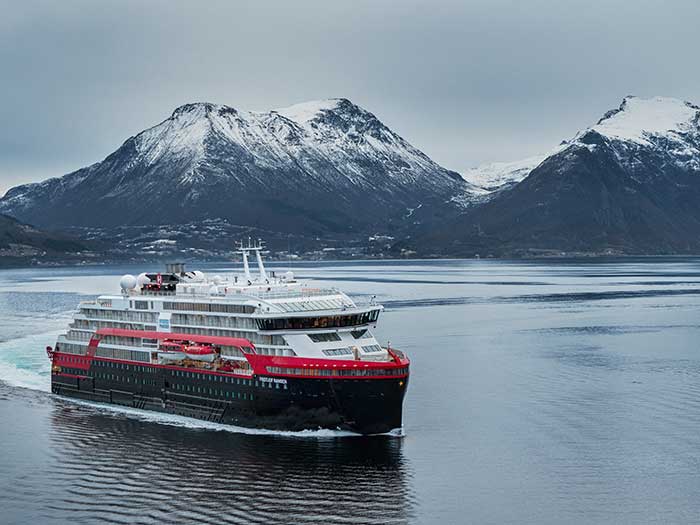 Hurtigruten reports that its second hybrid battery powered expedition cruise ship MS Fridtjof Nansen will be completed earlier than expected. As a result, Hurtigruten is offering a series of shorter pre-inaugural voyages.

The ship is a sister ship to Huretigruten’s first battery hybrid expedition ship, MS Roald Amundsen, and is currently in the final stages of outfitting at Norway’s Kleven Shipyard. Over the past week, the ship has been undergoing sea trials off the west coast of Norway where the its advanced, green technology, including her battery packs, was put to the test.

“We are extremely satisfied with the results of the sea trials. In fact, she performed so well that we concluded the tests a full day early,” said Kleven CEO Kjetil Bollestad. “Building on the experience we got from MS Roald Amundsen, we are confident in delivering one of the most advanced vessels in the world by end of the year.”

The ship is set for delivery by the end of 2019, well ahead of her April 1 inaugural voyage from Hamburg to the Norwegian coast.

Now Hurtigruten is offering a series of five-night pre-inaugural cruises from U.K. ports.

Departing from London (March 7), Liverpool (March 12) and Portsmouth (March 17), they will visit destinations such as Isles of Scilly, Fowey, Isle of Man and Dartmouth. A four-night voyage to the Norwegian capital of Oslo will take guests through the Kiel Canal and Aalborg in Denmark, from a landmark departure point; London’s Tower Bridge.