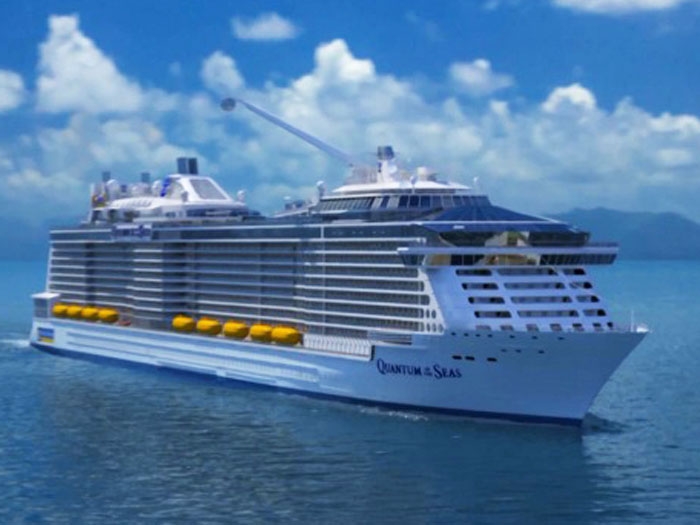 Quantum of the Seas

APRIL 17, 2014 — Royal Caribbean International is to homeport its newest cruise ship, Quantum of the Seas, in Shanghai. The ship will reposition to China in May 2015, following her inaugural winter season sailing out of New York Harbor to the Caribbean. In China, Quantum of the Seas will join Mariner of the Seas and Voyager of the Seas in Asia, increasing the company’s capacity in the region by 66 percent.

“Every trend we are seeing in China tells us we can achieve real long-term competitive advantage and appealing returns on our investments in this fast-growing market by accelerating our presence there,” said Adam Goldstein, President and COO, Royal Caribbean Cruises Ltd. “We will have to be nimble, but the ability to move fast is one of our strengths.”

He said the company was able to make the move because its new-ship pipeline will keep the New York region supplied with top-rate ships as well.

“We are very mindful of the importance of New York, which is why we are bringing Liberty of the Seas and then Anthem of the Seas [the second Quantum Class ship] to this market.”

Quantum of the Seas will debut in November 2014, and will spend its inaugural season sailing from Cape Liberty in Bayonne, N.J., before repositioning to China in May 2015.

Beginning late June 2015, the ship will sail three- to eight-night itineraries year-round from Shanghai to Japan and Korea. Liberty of the Seas will then arrive to Cape Liberty to sail to Bermuda, the Caribbean, and Canada and New England for the 2015 summer and autumn seasons. The Freedom-class ship will be the company’s newest and largest ship to offer cruises to Bermuda from the New York-metropolitan area. Finally, Quantum of the Seas’ sister ship, Anthem of the Seas, which launches in April 2015, will complete her inaugural Europe season from London (Southampton), U.K., before arriving at Cape Liberty in November 2015.