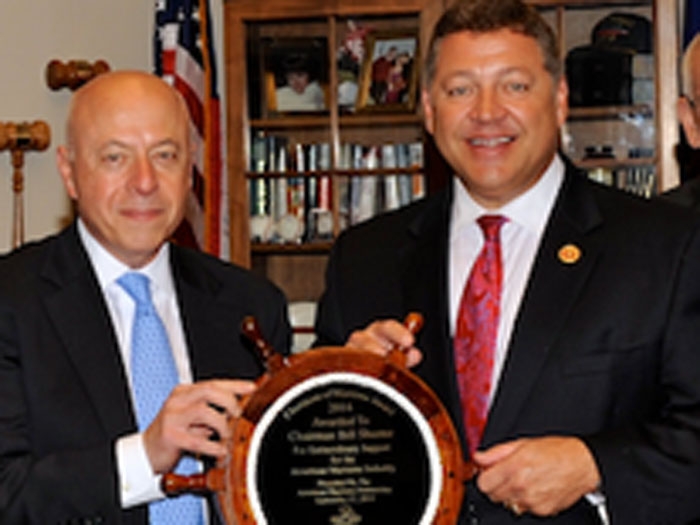 SEPTEMBER 18, 2014 — Rep. Bill Shuster (R-PA) this week received the 2014 Champion of Maritime Award from the American Maritime Partnership (AMP), the voice of the U.S. domestic maritime industry. The organization provides the prestigious award to recognize an individual who has displayed extraordinary dedication to and consistent support for the American maritime industry.

As the Chairman of the House Transportation Committee, Rep. Shuster and his committee have consistently highlighted the critical role America’s domestic maritime industry plays in the nation’s national, economic and homeland security.

“It is a great honor to be recognized as a Champion of Maritime,” said Rep. Shuster.  “This is a very exciting time for American maritime – the surge in our country’s energy production is helping drive record levels of new vessel construction in shipyards across the nation. I appreciate the many benefits of the Jones Act and this vibrant homegrown U.S. industry.”

“Chairman Shuster understands the integral role that American maritime plays in helping propel our nation’s economy as the safest, most efficient, and environmentally-friendly mode of freight transportation,” AMP Chairman Thomas Allegretti said.  “We especially appreciate his support of the Jones Act and his recognition that American maritime is an essential element of the nation’s multimodal transportation system. We also commend Chairman Shuster’s leadership in shepherding the Water Resources Reform and Development Act into law, which will greatly help to advance the reliability and efficiency of America’s waterways transportation infrastructure.”