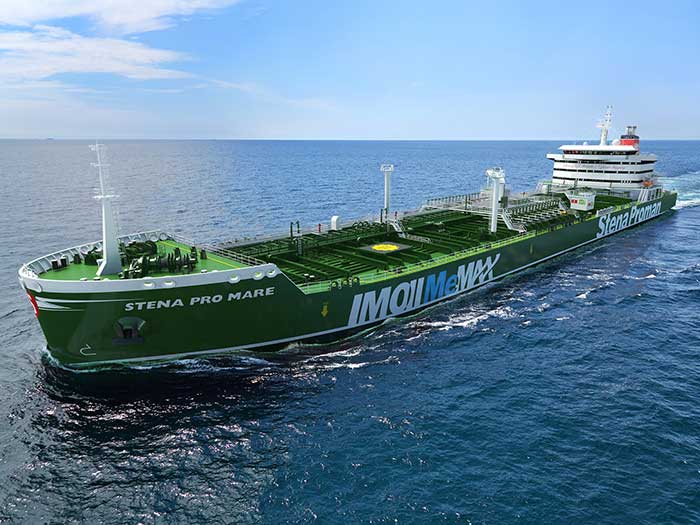 Proman Stena Bulk Ltd has finalized an agreement with Guangzhou Shipyard International (GSI) in China to build two state of the art IMOIIMeMAX methanol-fuel ready 49,900 DWT vessels, with the first vessel due for delivery at the beginning of 2022.

The deal is the first signed by the newly-created joint venture between Swedish based Stena Bulk and Swiss based Proman Shipping.

Following extensive development and towing tank tests by GSI and Stena Bulk for their 2015 – 2018 series, the IMOIIMeMAX line of vessels are amongst the most energy efficient mid-range tankers in existence.

Taking Proman Shipping’s commitment to supporting a more sustainable global shipping industry one step further, both vessels will be fitted with the latest generation of dual-fuel engines and run on methanol, which is rapidly emerging as one of the most viable, low emission and cost-effective marine fuel alternatives.

Available at over 100 ports around the world and with significant capital cost and safety advantages compared to alternatives such as LNG, methanol is seen by Proman Stena Bulk as offering a clear pathway towards meeting IMO’s commitment to cut carbon emissions from the shipping sector by 40% from 2008 levels by 2030, and overall greenhouse gas emissions by 50% by 2050.

Compared with regular marine fuel, methanol offers a more than 95% reduction in sulfur oxide (SOx) and particulate matter, and a 60% reduction in nitrogen oxides (NOx).

“Methanol is a readily available liquid fuel that meets the strictest emissions criteria, and it has huge global potential as a proven substitute for conventional bunker fuels, as well as more widely for power generation and as a high-octane addition to the gasoline fuel pool,” said David Cassidy, Chief Executive of Proman.

The two ships will be 50/50 owned and will go on long term charter to Proman Shipping after delivery. Each vessel will utilize an estimated 12,500 tonnes/year of methanol.

Proman Shipping AG was established in March 2018 and provides maritime expertise, commercial vessel management and global ocean transportation to the Proman family of companies. The company manages a fleet of 12 time-chartered vessels comprising of 9 zinc-coated and 3 epoxy-coated chemical tankers.

Proman is an integrated industrial group and a leader in natural gas derived products and services. Headquartered in Switzerland, with assets in the United States, Trinidad and Oman, and ongoing expansion into Mexico, Proman is the world’s second largest methanol producer and has extensive experience in petrochemical plant operations, petrochemical and power plant construction, product marketing and logistics, and project management.