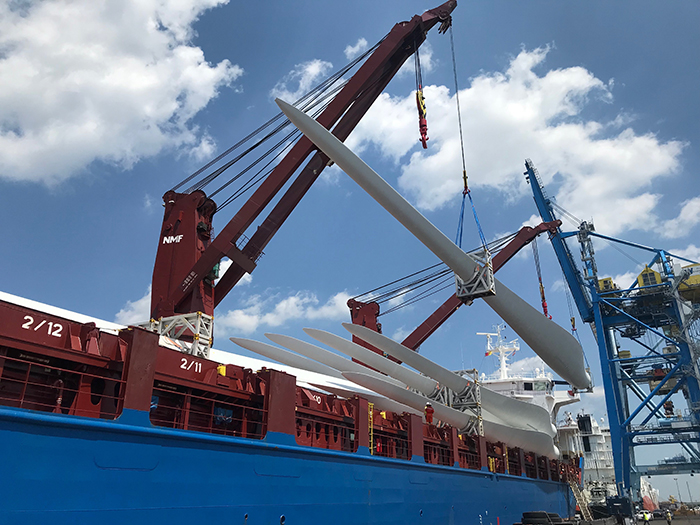 One of 39 wind turbine blades offloading at the Port of Wilmington.The 200-foot-plus blades were manufactured in Brazil and will be installed at the GE Renewable Energy Beech Ridge II wind turbine project in West Virginia

“This was a delicate operation as the slightest error could have resulted in damage to one blade, and that makes a group of three inoperable,” said Mike Hall, Chief Operations Officer.

More than 200 feet long weighing 13.5 tons each, the massive blades, headed for the GE Renewable Energy Beech Ridge II wind turbine project in West Virginia, were manufactured in Brazil and brought to Wilmington by the M/V BBC Topaz. A plaque to mark the occasion was given to its master, Captain Yuriy Vovk, in a ceremony on board the vessel.

“We are thrilled to be able to support mutual customer GE Renewable Energy by successfully receiving the largest wind turbine blades to cross our docks,” said GT USA-Wilmington CEO Eric Casey. “The efforts of the entire team led to providing quality service to GE Renewable Energy for whom we have handled hundreds of blades over many years.”

Casey said a second BBC Chartering vessel with 15 x 62.2 m blades from Suape, Brazil is due in August to complete the 54-blade shipment.