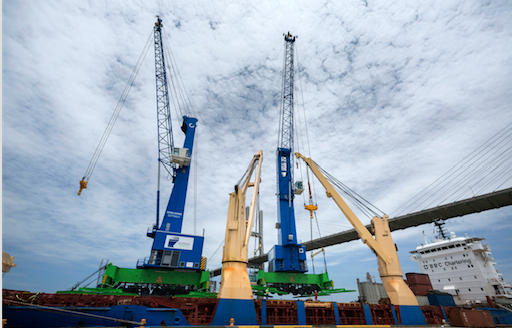 Cranes and material handlers—it’s something we haven’t written a whole lot about in Marine Log. Nonetheless, they are an essential part of shoreside shipping, whether they are at a container terminal on a coast or at inland ports to for loading and unloading barges. And as with many moving parts in any industry, crane technology is continually evolving.

In early July, two new mobile harbor cranes built by Konecranes Gottwald based in Finland were delivered to the Port of Savannah’s Ocean Terminal as the Georgia Ports Authority (GPA) expands its container-handling and berth capacity. Measuring 243-feet from ground level to boom tip, the cranes will offload containers from vessels carrying up to 4,800 twenty-foot equivalent (TEU) container units.

“We’re developing this into a niche terminal that will provide the highest priority and service to vessels in this class,” said GPA Executive Director Griff Lynch. “Expanded container service at Ocean Terminal could start as early as this year.”

Ships of up to 4,800 TEU capacity were previously served at Garden City Terminal’s Berth 1, which is slated to undergo renovation to straighten a bend. The berth renovation at Savannah’s main container port is necessary to accommodate additional 14,000-TEU ships. Berth 1 construction, when complete in 2023, will allow the GPA to handle four 14,000-TEU vessels simultaneously.

“Even during the downturn, Savannah’s market share has continued to increase,” said GPA Board Chairman Will McKnight. “Making strategic investments in our future and the future of our customers is what has enabled Savannah to become the third busiest gateway in the nation for container trade.”

With a lift capacity of 125 tons, the mobile harbor cranes can be configured to handle either containers or breakbulk cargo. Productivity is expected to be between 22 and 30 moves per hour.

Additionally, a portion of the docks at Ocean Terminal is being revamped for container ships, and new storage space will be added on the terminal. By the end of 2020, the renovation project will deliver improvements to Berth 18, an expanded container yard for dry and refrigerated boxes, eight new rubber-tired gantry cranes, and a new truck gate with direct access to Interstate 516. The expanded container terminal will have an annual capacity of 225,000 TEUs.

“This exciting new development at Ocean Terminal will allow the GPA to continue to meet and exceed the needs of our customers while the improvements are being made to Berth 1 in Garden City,” said GPA Chief Operating Officer Ed McCarthy.

Georgia’s deepwater ports and inland barge terminals support more than 439,000 jobs throughout the state annually and contribute $25 billion in income, $106 billion in revenue and $2.9 billion in state and local taxes to Georgia’s economy. The Port of Savannah handled 8.5% of U.S. containerized cargo volume and 10% of all U.S. containerized exports in FY2017. Visit Industry Insights on page 6 of this issue to see additional stats on the Port of Savannah.

In June, the Port of South Louisiana also partnered with Konecranes Gottwald. The 54-mile port district on the Mississippi River between New Orleans and Baton Rouge, ordered two Konecranes Gottwald Model 6 Portal Harbor Cranes for its public facility, Globalplex Intermodal Terminal (Globalplex). With commissioning planned for September 2021, the cranes will increase capacity for bulk materials and add flexibility for future handling of containers and project cargo. The purchase of the $12.72 million cranes was funded in part (90%) by $11.448 million from LA DOTD’s Port Construction and Development Priority Program.

The Port of South Louisiana is America’s largest-tonnage sea gateway for international trade. With increased throughput tonnage and the need for efficiency, Globalplex, located in Reserve, La., and on the east bank of the Mississippi River, saw the need for new, updated equipment. Konecranes will be providing the required high-performance and robust port equipment that would handle the large cargo volume and years of continuous use.

The two new cranes, Konecranes Gottwald Portal Harbor Cranes in the G HSK 6548 B four-rope variant, have a maximum lifting capacity of 125 tons. These flexible machines offer the potential for continuous-duty bulk material handling or heavy project cargo, but they’ll also include a boom-top cable reel to operate electric spreaders for container handling. Included are smart crane features such as cargo-hold totalizer, hoisting-height and working-range assistants. Further, web reporting and remote desktop control utilize the latest technology that adds ergonomics, efficiency, and safety to crane operation and performance. Mounted on customized portals, the cranes will use existing rail infrastructure. In order to minimize downtime, the order includes a large spare part package so that their own technicians can complete maintenance and some repairs quickly.

“We’ve taken the time to build a good customer relationship, and you can see the results,” says Alan Garcia, sales manager, Americas, Konecranes Port Solutions. “After two years working on this challenging project, it’s very satisfying to achieve what we set out to do. We hope to continue working with both Globalplex and Associated Terminals long into the future.”

Also in June, the world’s largest purpose-built material handler, a 460-ton giant, recently joined the ranks of working port machines. The Sennebogen 895 E-Series Hybrid, one of Stanley, N.C.-based Sennebogen’s many cranes being used for marine applications, was commissioned in October 2019 for the Tosyali Holdings fleet, at the Mediterranean Port of Iskenderun in Turkey.

Since then, the 895 has been moving massive amounts of scrap metals around the clock, every day. Electrically powered, the machine never needs to take a break for refueling.

Everything about this machine is big and record-breaking. A convoy of 16 trucks transported the machine to Turkey. Sennebogen’s Turkish distributor, Forsen Machinery, required only a few days to assemble its crawler platform, configure the set-up for Tosyali, and test run the 670 HP (500 kW) drive. Fitted with a 13-yard orange peel grapple, it can reach out to 130 feet (40 meters) to grab 12 tons (10,900 kg) of scrap on every bite from the holds of panamax and post-panamax ships. Its operators move quickly, perched in the highly responsive and accurate elevating Skylift cab as much as 72 feet (22 meters) above ground level. It also allows for surprisingly quick cycle times.

“We handle 10,000,000 tons a year in this port alone,” says Harun Karaarslan, Tosyali’s Technical Port Director at Iskenderun, in one of the Turkey’s largest metal producing areas. “Our machines are in constant use. We rely on our fleet to be producing constantly—downtime would be fatal.” The 895 material handler, of course, does not produce that entire throughput alone. Tosyali’s facility operates a total of seven material handlers, including two 600,000-pound (270,000 kg) Sennebogen 880 EQ balance cranes. Both the 880s also run on electric drive. These machines, says Karaarslan, were a big part of Tosyali’s confidence in moving up to the 895.

“Our experience with Sennebogen machines has shown us that using electric material handlers does not mean compromising on and flexibility or speed—quite the opposite,” Karaarslan adds. “Despite their size, the machines cover a large work area, moving quickly up and down the pier. By not using diesel, we also save a lot of money every year.” He notes further savings and maintenance costs, with longer service intervals and less wear on service parts than conventional diesel material handlers.

Nevertheless, one would expect a significant energy cost simply to move the 895’s huge lifting boom and stick—itself a 53-ton steel structure. But here again, the efficiency of the 895 towers above other material handlers.