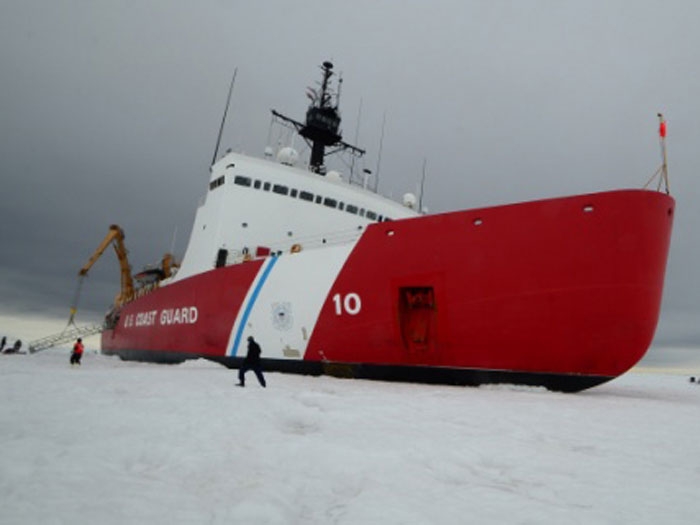 The Coast Guard Cutter Polar Star, a high-endurance icebreaker home-ported in Seattle, sits on the ice in the Ross Sea near Antarctica while underway in support of Operation Deep Freeze 2015

The 399-foot Polar Star is one of the world’s most powerful non-nuclear icebreakers.  It is the nation’s only heavy icebreaker capable of operating in the thick Antarctic ice for a mission such as breaking out the Antarctic Chieftain or clearing McMurdo Sound for the annual resupply of McMurdo Station. The 150-person crew of Polar Star was deployed to McMurdo Station when Rescue Coordination Center New Zealand (RCCNZ) requested the icebreaker to respond to a request for assistance from the 63 m Antarctic Chieftain, owned by Australian Longline Pty, which became trapped after damaging three of the four blades of its propeller.

The fishing vessel is located at the eastern edge of New Zealand’s search and rescue region, approximately 900 nautical miles (1,700 km) from McMurdo Sound. There is a crew of 26 on board, 13 of whom are New Zealanders.

The CG Polar Star was approximately 100 nautical miles (185 km) to the west of the Antarctic Chieftain at the time of the most recent Maritime New Zealand report and was likely to reach the area late on Friday or early on Saturday, depending on weather and ice conditions.

RCCNZ Search and Rescue Mission Coordinator Greg Johnston said the fishing boat’s hull was not damaged, and the crew of 26 was not at risk. There has been no spill of oil or environmental event

.”The crew is safely on board, they have plenty of supplies and the vessel integrity is not compromised,” he said. “There is clear water around the vessel, so the hull is not being squeezed by the ice, but a combination of an unexpected build-up of ice floes 2–3 m thick and damage to the propeller means it cannot get back to the open sea without assistance.”

The New Zealand-flagged fishing boat, Janas, approximately 750 nautical miles (1,390 km) to the north-west, is also proceeding to the area to provide assistance and is expected to take 3–4 days to reach the edge of the ice.

The crew of 40-year-old Polar Star has reported heavy, snow, wind and ice conditions at times as well as large icebergs along their course.

“We are navigating through heavy pack ice, dodging massive ice bergs that range in size from a Home Depot to some that are miles across, often in low visibility conditions,” said Capt. Matthew Walker, commanding officer of the Polar Star. “The mission…we are now engaged (in) demonstrates the Coast Guard’s core mission to save lives at sea – in any continents’ waters. Polar Star is proud to be able to assist New Zealand in the rescue of the Australian fishing vessel Antarctic Chieftain.”

The Polar Star will have to break the ice around the Antarctic Chieftain to reach it. If the vessel’s propulsion is inoperable, the Polar Star may have to tow the vessel from the ice field.

Once the Antarctic Chieftain is freed from the ice, the Janas is scheduled to escort or tow the vessel to the nearest safe harbor.