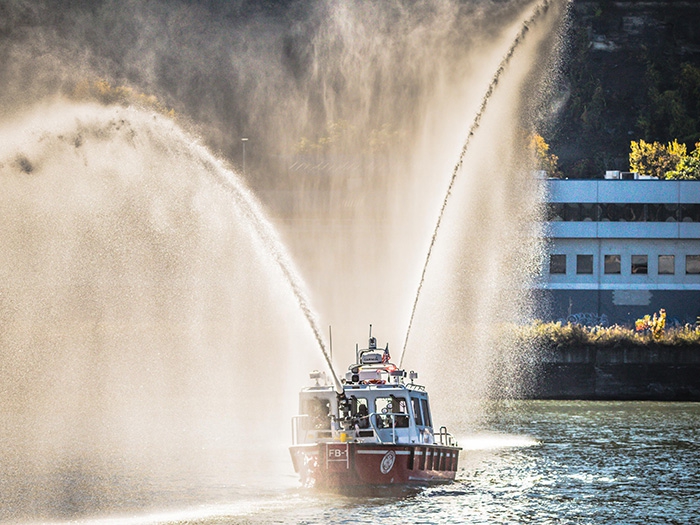 Lake Assault Boats has delivered a 34-foot, high-performance fireboat to the Pittsburgh Bureau of Fire in Pittsburgh, Penn. The fireboat is named after Pittsburgh's first female mayor, the late Sophie Masloff

NOVEMBER 10, 2017 — Superior, WI, based Lake Assault Boats has delivered a 34-foot, high-performance fireboat to the Pittsburgh Bureau of Fire in Pittsburgh, PA.

The fireboat, named after Pittsburgh’s first female mayor, Sophie Masloff, who passed away in 2014, was dedicated in a ceremony at which the late mayor’s eldest granddaughter broke a bottle of champagne on the boat’s gunwale as it was launched into the Ohio River.

The Lake Assault deep V-hull fireboat will respond to emergencies and help manage fires on the waterways, waterfronts, marinas, and rail lines that lie along the Allegheny and Monongahela Rivers, which join together in Pittsburgh to form the Ohio River.

“This new fireboat will greatly enhance our department’s emergency response capabilities, particularly by supporting ground-based firefighting apparatus as well as responding to on-the-water emergencies; we’re thrilled to have it here to serve the citizens of Pittsburgh,” said Darryl E. Jones, Chief, Pittsburgh Bureau of Fire. “This is our department’s first dedicated fireboat since 1974, and it’s an excellent new tool to have in our firefighting arsenal. During its time here in training, the boat has performed flawlessly.”

The craft’s firefighting system features a compact Hale 80FC pump delivering up to 3,000 gpm which is powered by a dedicated 6.6L Duramax V-8 diesel engine. The fire pump includes a 6-inch main discharge that feeds a number of outlets, including bow and stern mounted TFT Hurricane monitors, each capable of delivering 1,250 gpm.

“The bow’s deck gun can be operated from inside the pilothouse, and that gives us a great deal of firefighting power while keeping firefighters in a controlled environment,” said Chief Jones.

Lake Assault Boats is a subsidiary of Capstan Corporation, which is also the parent company of Fraser Shipyards.