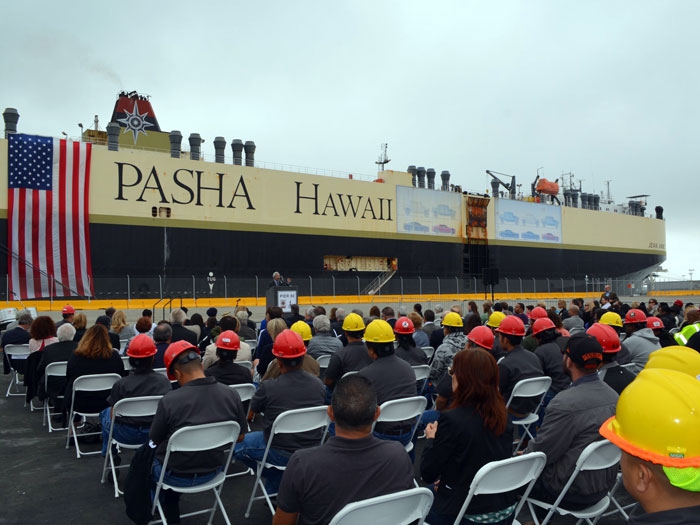 Photo tweeted by S.F. Mayor Edwin Lee of the ceremony held at the Port of San Francisco for the first ship call by Pasha Automotive Services at Pier 80

AUGUST 23, 2016—Pasha Line’s 12,424 dwt Roll-on/Roll-Off ship M/V Jean Anne called at the Port of San Francisco yesterday with some 500 autos onboard for Northern California dealerships, ushering in vehicle import and export by ship at the port’s 69-acre cargo terminal Pier 80. The pier is expected to receive as many as 96 ships per year, transporting 150,000 vehicles.

Pasha Automotive Services (PAS), a subsidiary of the family-owned Pasha Group, San Rafael, CA, signed a new 15-year lease agreement with the port to allow the import and export of vehicles by ship at Pier 80, with on-terminal automobile preparation and detailing services.

“Pasha Automotive’s transformation of Pier 80 reopens our city as a national hub for shipping and trade,” said San Francisco Mayor Edwin Lee. “The revival of a once thriving industry ushers in a new era of commerce at the Port of San Francisco, bringing economic growth and creating hundreds of new local skilled-worker jobs in the Southeast neighborhoods.”

Pier 80 will employ about 50 longshore workers during vessel operations and as automobile processing reaches capacity, it is anticipated that 150 new employees will be hired and trained. These jobs, which can be filled by workers with various skill levels, will enhance economic opportunities particularly in San Francisco’s District 10.

Pasha has entered into an agreement with CityBuild, an employment program under the Mayor’s Office of Economic and Workforce Development where CityBuild will provide a screened and qualified workforce comprised of skilled San Francisco residents for processing work at the Pier 80 operation.

“This is an exciting day for our company, and our family,” said John Pasha, Senior Vice President of Pasha Automotive Services.  “Not only are we returning to our roots in San Francisco, but we are transforming this underutilized pier to a facility requiring a maritime use to serve customers and create local jobs.  As a company, we are committed to ensuring that maritime uses are supported, and that our country’s valuable waterfront assets receive the investment they need to serve commercial, not just recreational uses.”

Pasha noted that U.S. auto sales hit a record high of 17.5 million in 2015, and are expected to increase as more young buyers enter the market.  “This increased capacity will allow us to serve the Northern California market, and reduce the environmental footprint of cars being unloaded in Southern California and trucked north,” he said.  “We are delighted to offer customers additional options for their roll-on/roll-off cargo at this key shipping hub, and look forward to partnering with the Port and the City in future growth.”

Pier 80, San Francisco’s primary general cargo terminal, consists of about 69 acres of cargo laydown space, two warehouses, and four deep-water berths. In addition to serving as a cargo terminal, Pier 80 provides the city a vital facility for emergency preparedness and resiliency in the event of a natural disaster.