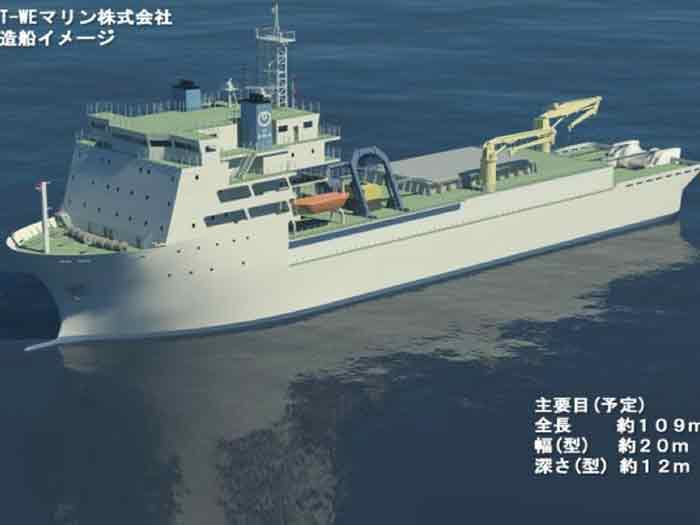 NOVEMBER 16, 2016 — An increasing volume of all that data that’s up there in “the Cloud” actually gets shifted by optical fiber undersea cables. Helping Japanese telecommunications giant NTT meet this growing demand will be its new submarine cable-laying vessel Kizuna, launched yesterday at the Kanrei shipyard in Tokushima, Japan.

The 8,500 gt ship measures 109 meters in length and 20 meters in width, andwill have a planned average cruising speed of 13 knots and a capacity of up to 60 crew.

Construction will be completed by the end of fiscal year 2016.

Kizuna is configured with its main working space in the stern. Its advanced design incorporates azimuth propellers, an electric propulsion system and a dynamic positioning system that allows it to remain on station in wind velocities of up to 14 meters per second, wave heights of up to 3 meters and ocean currents of up to 3 knots.

Kizuna will have a large open working deck with two heavy-duty cranes and a large secured work space at the stern, allowing it to be deployed for a variety of tasks, including cable maintenance as well as cable laying.

Part of its equipment will be a Remotely Operated Vehicle (ROV) equipped with a jet cable laying system and with a maximum operating depth of 2,500 m. The ROV will allow rapid troubleshooting, speedy determination of any points of failure and easier replacement of cable following any repairs.

Kizuna is smaller than its existing sister ship Subaru, making it suitable for work within congested Japanese waters.

Careful use of space and the extensive deployment of electronic equipment will allow small teams of people to carry out more routine maintenance work efficiently. Flexible functionality will facilitate rapid disaster response

Kizuna has been designed to assist during disaster recovery operations, for example through the rapid shipment of containers and other supplies.

NTT plans to deploy the new ship Kizuna predominantly for cable laying in Japanese waters, with the existing Subaru being used mostly overseas, with both vessels offering fast and competitive undersea cable laying and maintenance.