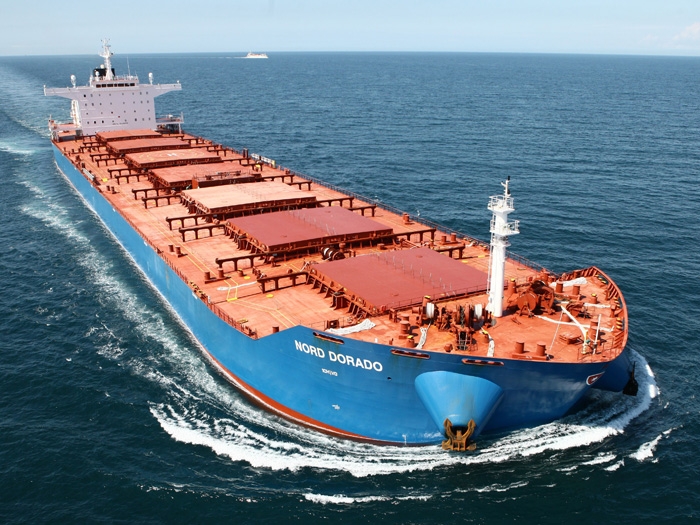 JANUARY 21, 2016 — Copenhagen headquartered DS Norden AS is writing down the value of its dry cargo fleet and making a provision, with no cash flow effect, of $340 million. The company is writing down the carrying value of its owned dry cargo vessels by $180 million and at the same time making a $160 million provision for losses on long-term chartered dry cargo vessels. The total $340 million will be included in the annual results for 2015.

As a consequence of the write-down and the provision, Norden is reducing its guidance for the year and now expects a full year EBIT loss for 2015 of $297$277 million, as against its previous guidance of a $43-$63 million EBIT profit.

Norden says that he market values of dry cargo vessels and the forward rates for the coming years dropped drastically in the fourth quarter of 2015. At the end of the year, broker valuations of Norden’s owned vessels and shipbuilding contracts, including joint ventures and assets held for sale, were $203 million below the carrying amounts and cost prices of newbuildings, and Norden has therefore completed a routine impairment test.

The write-down and the provision, which are based on value in use, are a consequence of the fact that management, in the impairment test for dry cargo, has reduced its expectations for future freight rate levels compared to previous assumptions.

On this basis, management expects continued weak rates on a level with the current FFA rates for the coming two years, after which rates are expected to improve gradually.

Management’s long-term rate expectation is based on the 25-year historical average, minus the unusually strong period 2004-2008.

Norden says “the calculation is very sensitive to even small changes particularly in the rate assumptions and the applied discount rate.”

Following the write-down and the provision, the book value of Group equity of $0.9 billion (approx. DKK 150 per share) is in line with the likely value of future cash flows based on management’s current market assumptions.

Norden has also performed an impairment test of its other business area, its product tanker fleet, and has found that there is no need for adjustment of the fleet values or the T/C contracts in this segment.

The provision related to the long-term chartered dry cargo vessels will be distributed over the next four years leading to a positive EBIT impact of a similar amount over that period. About one-third of the provision will be reversed in 2016.The write-down of owned vessels entail an improvement of EBIT in 2016 of $10 million as a result of reduced depreciation.

Norden says that neither the write-down nor the provision has any impact on cash flows or loan agreements, and Norden says it continues to be financially strong. At the end of 2015, cash and securities amounted to $355 million, in addition to which it has undrawn credit facilities of $296 million.