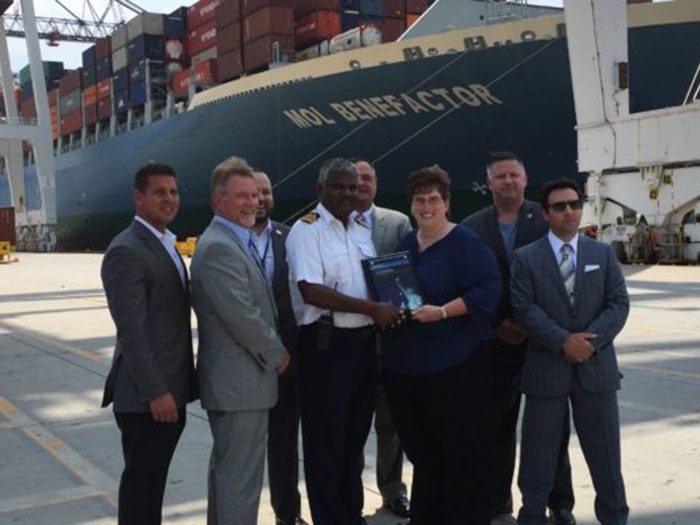 Port officials and employees of GCT USA today welcomed the captain and crew of the MOL Benefactor, the first container vessel to transit the expanded Panama Canal locks and visit an East Coast port, and the largest vessel ever to call on the Port of New York and New Jersey

It was the third record marked by the giant containership since July 1, when it became the first neopanamax ship to make a commercial transit of the expanded Panama Canal. Another record it set that day was paying the highest Panama Canal transit fee of all time — a whopping $829,468, according to a tweet by Panama Canal Administrator Jorge L. Quijano.

Obviously, the economies made possible by the expanded canal make ship operators willing to pay fees in that order of magnitude.

Previously, the largest ship to call on the port was the 10,070 TEU Zim Tianjin in spring 2015, which was also serviced by GCT Bayonne.

GCT USA completed expansion at the state-of-the-art Bayonne terminal in the summer of 2014, ensuring the port was big ship ready for large vessels already transiting the Suez Canal.

“Today’s event shows that we are big ship ready and that shippers can move cargo to and from New York and New Jersey and beyond on larger, more fuel efficient vessels, carrying consumer and industrial goods in fewer calls,” said Port Authority Executive Director Pat Foye. “This is great news for the 336,000 jobs the port already supports and the billions in economic activity it provides. But equally important, it’s good news for the environment in and around the harbor.”

“We welcome the MOL Benefactor to our port and look forward to other large ships visiting the port in the coming weeks,” said Port Authority Port Commerce Director Molly Campbell. “Today’s ship call validates that we are open for business and that we are big ship ready now that the Panama Canal project is complete. We look forward to handling even more megaships at our terminals in the Port of New York and New Jersey once the Bayonne Bridge is raised by the end of next year.”

“GCT is committed to service excellence and innovation for our customers,” aid John Atkins, GCT USA President. “Our private investment expanded and modernized GCT Bayonne in advance of the Panama Canal completion, ensuring that the Port of New York and New Jersey was big ship ready. This enables us to handle our customers’ largest vessels now and for years to come, ensuring that New York remains the harbor of choice.”

To prepare for the new larger ships, the Port Authority and its private sector tenants have invested approximately $6 billion in projects to prepare the port complex.

The most critical investment is the raising of the roadway on the Bayonne Bridge, a $1.3 billion project that will increase the navigational clearance under the bridge from 151 feet to 215 feet.

Ships docking at GCT Bayonne do not have to travel under the Bayonne Bridge.

The bridge’s navigational clearance will be in place by the end of 2017, allowing all terminals to serve the largest ships calling the port.In addition, a 10-year project to deepen the harbor’s channels to 50 feet will be completed this summer. The Port Authority also invested $600 million to equip port terminals with environmentally-friendly on-dock rail, in addition to significant investments to upgrade the port’s internal road network.

During the upcoming weeks, additional large ships from the G6 Alliance will make their maiden voyages to the Port of New York and New Jersey, calling GCT Bayonne.