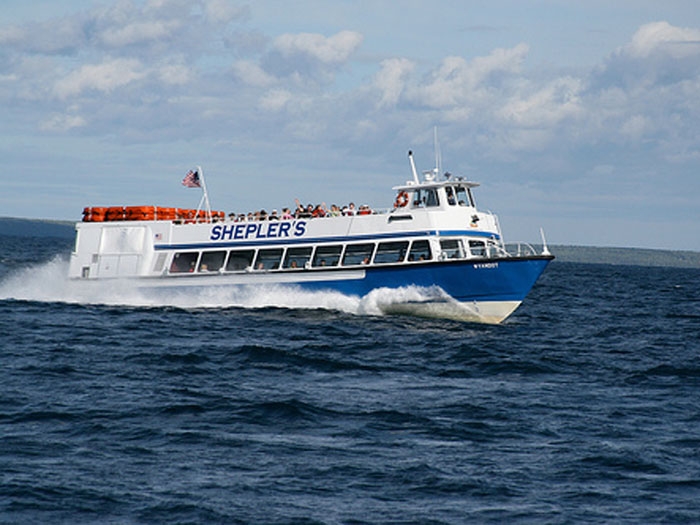 DECEMBER 8, 2014—Shepler’s Mackinac Island Ferry, Mackinaw City, MI, recently ordered a new 85 ft, high-speed ferry from Moran Iron Works, Onaway, MI. The $3.8 million ferry is the first of its kind to be built in Michigan in recent memory. In the past, a number of ferries were built at now-defunct shipyards in the state.

“The idea of building a climate-controlled ferry for our customers right here in Michigan—instead of sending the work elsewhere— really appealed to us,” said Bill Shepler, CEO of Shepler’s. “As a third-generation family business, we’re focused on giving back to the region that has been so good to us.”

The keel for the ferry will be laid in January and its hull completed over the next four months. The ferry will then be launched through Moran’s Port Calcite Collaborative, a deep-water port in nearby Rogers City, MI, and transported to Shepler’s facility in Mackinaw City, where seating will be installed and painting done.

Designed by Seacraft Design, Sturgeon Bay, WI, the 281-passenger ferry will be built in accordance with U.S. Coast Guard Subchapter K rules and it will be Shepler’s largest and have a top speed of about 40 mph. Shepler’s currently has a fleet of five passenger ferries and one cargo vessel, the newest being the 1986-built Capt. Shepler.

The 85-foot, all-aluminum ferry will be named the “Miss Margy,” after Shepler’s mother —is scheduled to carry its first passengers in July 2015. It will include an air-conditioned cabin, as well as a ventilation system to remove interior condensation from windows, improving the view for passengers during inclement weather.

Investing in Michigan economy
Shepler and Tom Moran, CEO and Founder of Moran Iron Works (shown at left), announced the project today at Moran’s fabrication facility, where pre-production processing and planning are already under way.

“This provides thousands of man hours of work to Northeast Michigan and demonstrates the Shepler family’s commitment to providing jobs for our communities, ” Moran said.

Presque Isle County’s non-seasonally adjusted jobless rate was 7.9% in October, according to the Michigan Bureau of Labor Market Information & Strategic Initiatives. That’s well above the national average of 5.8%. Only six of the state’s 83 counties had worse rates than Presque Isle County.

Moran and Shepler’s have previously collaborated on modifications for two vessels, but this is their first ferry construction project. “But for this project, we liked the idea of watching it being built and having a say in how it was being built,” Shepler said. “This may be Moran’s first ferry, but they are so particular in what they do that there was no question in our minds that this was the right way to go. Moran is the epitome of doing it right.”