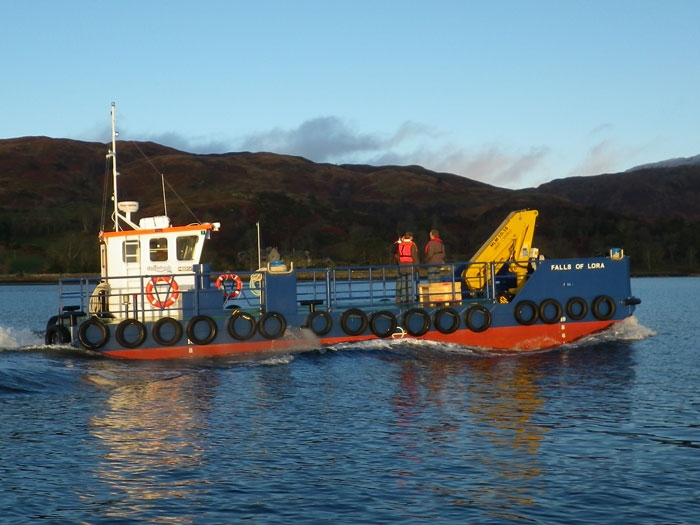 Falls of Lora is now in operation with Dawnfresh Farming

Named the Falls of Lora, the vessel is now in operation at Dawnfresh’s trout farming operation on Loch Etive, where it is being used for general fish farm maintenance with a particular focus on feeding operations.

With a cargo carrying capacity of 15 tonnes, a Heila HLM 10-3s crane with remote control and twin 2-tonne capstans, the Meercat is well suited for lifting operations and net handling.

Considerable focus was placed on creating a large, clear “snag free” deck with ample use of flush deck fittings and limited use of deck hatching.

Gideon Pringle, Farming Director at Dawnfresh, said: “This project has probably been one of the most successful that I have known in terms of accuracy and achieving expectations.”

New Meercat Managing Director Jason Coltman commented: “This is the twenty second vessel built by the company and the first under the new ownership. Again, we have delivered the project on time and on budget, underlining our growing role as a leading supplier of small workboats.”

Falls of Lora is the third Meercat built for fish farming. The Meercat hull-form, clear deck configuration, impressive payload and variety of equipment options have proved well suited to handle the multitude of tasks that fish farm management demands.
“Meercat’s approach to this build was very professional,” said Sean Lydon, the business support manager. “They worked tirelessly with us to deliver a vessel to an agreed specification and exactly on time. This craft will be used to assist in feeding operations across all our sites on Loch Etive.”
The aim of Meercat’s 15-strong workforce is to expand the company’s product range to include barges, canal tugs, bigger class-approved workboats and aluminum builds for wind farm support.
Parent company Burgess is currently building three 25 m aluminum wind farm support vessels for Mainprize Offshore at Portchester.
Falls of Lora is now in operation with Dawnfresh Farming