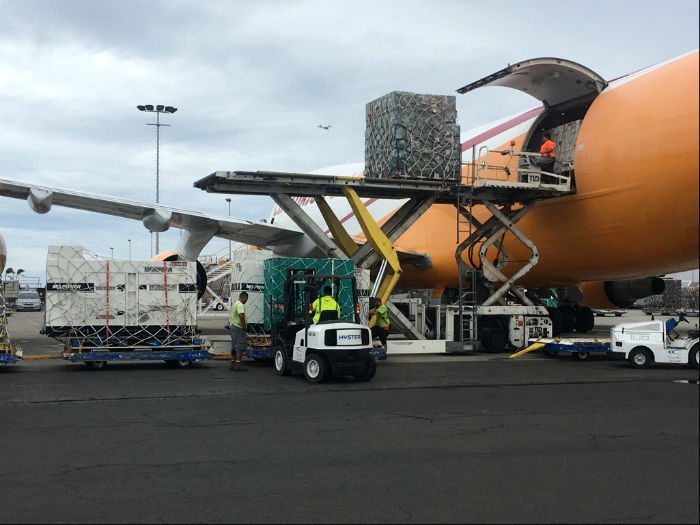 FEMA reports that it has pre-staged food, water, generators, etc., on Hawaii in preparation for Hurricane Lane

AUGUST 24, 2018 — With Category 3 storm Hurricane Lane bearing down on Hawaii, Matson Navigation Company reports it is continuing to sail its vessels that serve the islands on a normal schedule to position inbound cargo for discharge as soon as possible after the reopening of Hawaii ports. The U.S. Coast Guard has set port condition Zulu at Hawaiian ports.

On Twitter, the Federal Emergency Management Agency (FEMA) reports it is working with the Coast Guard on preparations for the storm. It says it has pre-staged food, water, and generators on Hawaii in anticipation of the storm.

Matson’s vessel Mahimahi arrived at Honolulu on time on August 22 and 537 containers were discharged prior to the closure of Honolulu Harbor.  The vessel was then moved to a safe position offshore and will return to complete discharge of an additional 615 containers when the port reopens.

Including cargo that arrived on August 22 and has not yet been picked up by customers, there was a total of 665 containers of goods ready for pick up at Matson’s Honolulu terminal when it closed in accordance with State Department of Transportation port closures on August 23 at 11:00 a.m. HST.

Matson vessels Manoa, Manulani, Matsonia and Mokihana, carrying a combined 3,500 containers of goods, are scheduled to call Honolulu on August 25, 26, 28, and 29, respectively, and will sail as scheduled to be positioned for service as soon as Honolulu Harbor is reopened.

In addition to the discharge of cargo from Mahimahi, two of Matson’s three barges dedicated to serving Hawaii’s neighbor island ports from Honolulu were loaded and dispatched early morning on August 23 toward Kahului and Hilo, respectively, where they will position offshore and be ready to serve those ports as they reopen.

Matson has secured all of its facilities in accordance with its hurricane preparedness plan and remains in frequent communication with the U.S. Coast Guard and the State of Hawaii Department of Transportation.