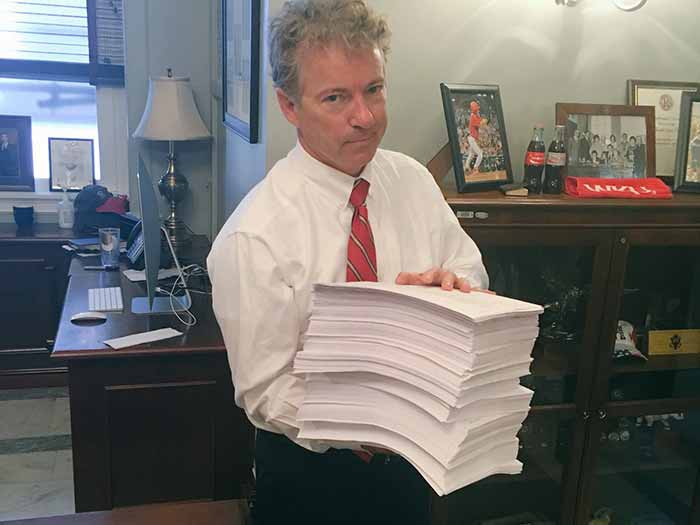 Senator Rand Paul posed with the 2, 232 pages of the Omnibus Spending Bill: Navy shipbuilding measures come in around page 268

MARCH 23, 2018 — The 2,232 page omnibus spending measure just passed by both the House and Senate, formally the ‘‘Consolidated Appropriations Act, 2018,” provides $23.8 billion for Navy shipbuilding, $3.3 billion above the Navy request. The additions include one more Littoral Combat Ship (LCS), bringing the total for FY 2018 to three, rather than the one requested.

The bill also includes $150 million for the U.S. Coast Guard Polar Icebreaker program under the Navy Shipbuilding and Conversion budget.

However, nothing was certain until the measure was signed into law and this morning President Donald Trump tweeted this:

“I am considering a VETO of the Omnibus Spending Bill based on the fact that the 800,000 plus DACA recipients have been totally abandoned by the Democrats (not even mentioned in Bill) and the BORDER WALL, which is desperately needed for our National Defense, is not fully funded.”

In the event, President Trump did sign it, saying he did so “as a matter of national security.”

Navy shipbuilding and conversion is funded from within the Shipbuilding and Conversion Navy (SCN) appropriation. SCN funds finance the construction of new ships and conversion of existing ships, including service life extensions and nuclear refueling and complex overhauls (RCOH). Included in the SCN appropriation are hull, mechanical and electrical equipment (HME), electronics, guns, torpedo and missile launching systems and communications systems. SCN also includes plant equipment, ship outfitting and post delivery projects, machines and tools. Below is a table outlining the approriations in the omnibus spending bill.