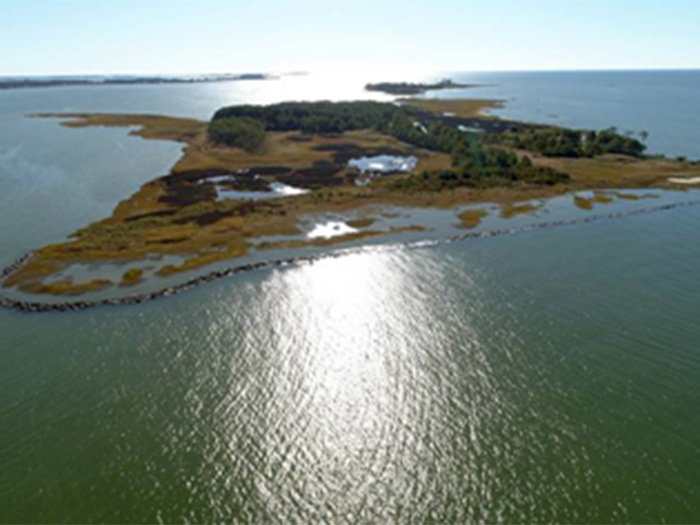 The Mid-Bay project will ultimately replace the Paul S. Sarbanes Poplar Island Environmental Restoration Project, which has been Maryland’s primary site for reuse of sediment dredged from Port of Baltimore shipping channels.

A pair of vanishing islands off the coast of Dorchester County, Md., are to be restored using dredged sediment.

The Maryland Department of Transportation Maryland Port Administration (MDOT MPA) project will use dredged material to restore island habitat at James and Barren islands and help protect the Dorchester County shoreline from erosion.

The project will begin in September 2022 and the island sites will eventually replace Poplar Island in Talbot County as the state’s primary receiving site for bay channel dredged sediment.

The larger of the two, James Island, will have 2,072 acres restored, with 55% preserved as wetlands habitat and 45% as upland habitat. At Barren Island, 72 acres will be restored as wetlands and the project will also include the installation of breakwaters to protect island remnants and adjacent seagrass beds.

“The use of dredged material to rebuild islands and create wildlife habitat shows that our team at the port is focused not only on growing Maryland’s economy, but also maintaining an outstanding level of environmental stewardship,” said MDOT Secretary James Ports Jr. “The Mid-Chesapeake Bay Island Ecosystem Restoration is the latest example of our tremendous partnership with the U.S. Army Corps of Engineers. At James and Barren islands, this project will encourage wildlife, protect shorelines and restore a piece of the Chesapeake Bay’s natural beauty.”

Restoration around Barren Island will commence first—with construction beginning in September based on the USACE allocation. James Island construction is anticipated in 2024. Barren will accept sediment from nearby shallow-draft channels. James Island will accommodate an estimated 90 million to 95 million cubic yards of dredged sediment, providing at least 30 years of capacity. USACE will turn the project over to the state when the habitat development is complete.

The Mid-Bay project will ultimately replace the Paul S. Sarbanes Poplar Island Environmental Restoration Project, which has been Maryland’s primary site for reuse of sediment dredged from Port of Baltimore shipping channels. Construction for Poplar’s final expansion, which added four new wetland cells and one upland cell, was completed last year. The expansion added 575 acres and capacity for 28 million cubic yards of material. Poplar will continue receiving dredged sediment until 2032 when Mid-Bay will begin receiving that sediment.

“Maryland is an international leader in the beneficial use of dredged material for coastal and island restoration,” said MDOT MPA Executive Director William Doyle. “We are thinking ahead and planning for anticipated climate changes by strengthening our barrier islands.”

The water resources investment is a part of $14 billion released to the USACE Wednesday, largely stemming from supplemental funding in the Infrastructure Investment and Jobs Act intended to fund civil works studies and projects. The workplan also includes funding for other Maryland projects: $2.1 million for dredging and surveys at Herring Bay and Rockhold Creek in Anne Arundel County; $2.4 million for dredging and surveys for Northeast River in Cecil County; and $50,000 for engineer surveys for Slaughter Creek in Dorchester County.