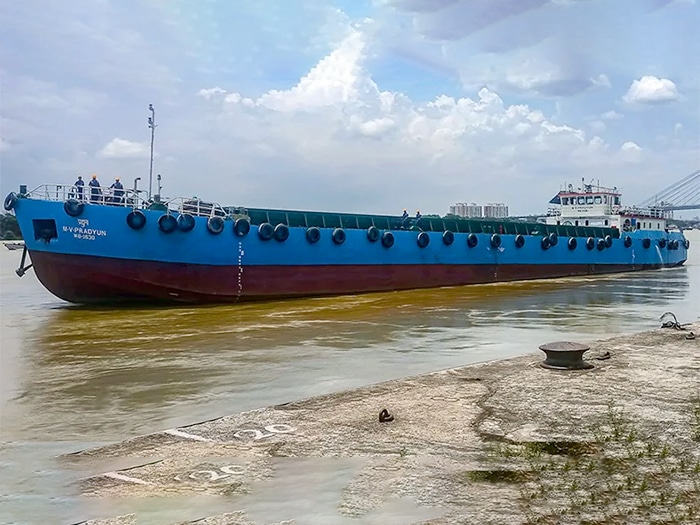 Inland waterways vessel on Indo-Bangladesh Protocol Route: The first movement on Maersk’s end-to-end integrated logistics solution on the route involved the transportation of containerized cargo from Kolkata, India, to a river port near Dhaka, Bangladesh.

Maersk has successfully completed the first India-Bangladesh cross-border logistics of containerized cargo using the inland waterways of the Indo-Bangladesh Protocol Route. By transporting 50 TEU containers for Coca-Cola Bangladesh Beverages from Kolkata (formerly Calcutta) in India to a river port near Dhaka in Bangladesh on a barge on the National Waterways 1 on the India side, Maersk says it has created a new opportunity for customers to use the faster, more reliable inland waterways solution that connects the two countries.

India and Bangladesh have a long standing and time-tested Protocol on Transit and Trade through the inland waterways of both countries. There are around 10 Indo-Bangladesh protocol routes under the protocol, but up until now their potential for container on barge operations looks to have been under-utilized.

“Cargo movement on inland waterways or rivers is much more reliable, especially in monsoons, when the turbulent weather can cause delays while transporting goods over the ocean,” says Vikash Agarwal, managing director, Maersk South Asia. “Moreover, with the ocean network running under capacity pressure, the alternative inland waterways route that is quicker and more reliable has received a warm welcome from shippers. This solution also addresses the bottleneck at the land border between the two countries. The maiden barge voyage has been successfully executed where there has been a significant reduction of transit time. The delivery schedule of the cargo, which used to be routed through the transhipment hub and then arrive in Chittagong and further to the destination, used to be impacted severely with delays. The speed of delivery with the new solution offered by Maersk over inland waterways is going to be extremely beneficial for us.”

“The Governments of both countries have encouraged trade on the Indo-Bangladesh Protocol Route for a long time and recently strengthened the customs processes further to enhance the ease of doing business,” says Soumyendu Sen Sarma, director – finance, Coca-Cola Bangladesh Beverages. “Our solution to move cargo across the Indo-Bangladesh border has a saving of over 60% in terms of transit time. In addition to the faster mode of transport, we are able to give end-to-end visibility to our customers through daily status reports, which give a comparison between the estimated timelines against actual timelines. The negligible variations in these comparisons prove high reliability and have been thoroughly appreciated by our customers.”

“The Indo-Bangladesh Protocol Route is not only a benefit for trade between India and Bangladesh but also extends the connection to landlocked Bhutan.” says Angshuman Mustafi, head of Maersk Bangladesh. “With the option of providing an end-to-end integrated logistics solution, Maersk’s customers can move their cargo from origin to destination using first-mile and last-mile services, including landside transportation by road or rail, customs clearance, warehousing and distribution, supply chain management etc.”