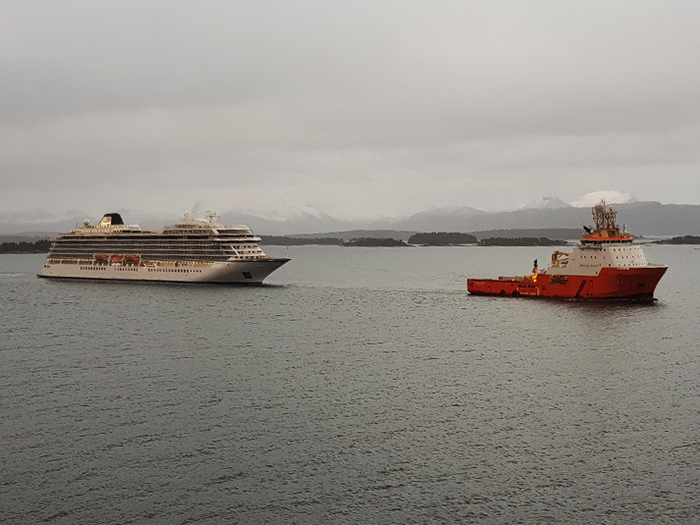 The Norwegian Maritime Authority (NMA) says that it has been working throughout the night with classification society Lloyd’s Register and the shipowner to determine why the cruise ship Viking Sky suffered a power black out this past Saturday (see earlier story).

“For the present, our conclusion is that the engine failure was directly caused by low oil pressure,” says NMA.

It says that the level of lubricating oil in the tanks was within set limits, though relatively low, when the vessel started to transit the Hustadvika stretch of coastline.

“The tanks were provided with level alarms, however these had not been triggered at this time,” says NMA. “The heavy seas in Hustadvika probably caused movements in the tanks so large that the supply to the lubricating oil pumps stopped. This triggered an alarm indicating a low level of lubrication oil, which in turn shortly thereafter caused an automatic shutdown of the engines.”

The NMA has drawn up a general safety notice about ensuring a continuous supply of lubricating oil to engines and other critical systems in poor weather conditions. This should be done in cooperation with the engine supplier and, moreover, be included in the ship’s risk assessments in the safety management system.

Viking Ocean Cruises has made the following statement: “We welcome the prompt and efficient investigation carried out by the NMA and we fully understand and acknowledge their findings. We have inspected the levels on all our sister ships and are now revising our procedures to ensure that this issue could not be repeated. We will continue to work with our partners and the regulatory bodies in supporting them with the ongoing investigations.”

Norwegian Maritime Authority says it “will continue the constructive dialogue with the classification society, company and the Accident Investigation Board Norway in order to reveal underlying causes and identify appropriate measures.”

NMA notes that last night it granted a permit allowing the Viking Sky to sail on a single voyage to Kristiansund to have necessary repairs made.