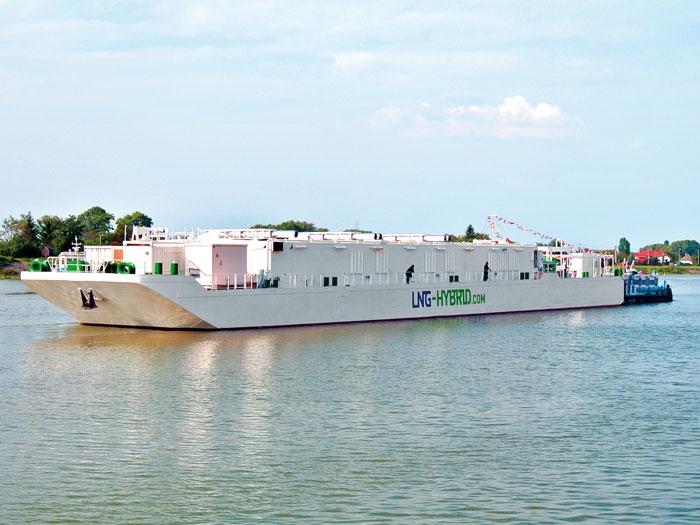 OCTOBER 1, 2014 — Dirk Lehmann, Managing Director of Becker Marine Systems, says that the first LNG Hybrid Barge is expected to arrive at its future home port of Hamburg, Germany, this weekend.

Built at the SAM Shipbuilding and Machinery shipyard in in Komárno, Slovakia for Becker subsidiary Hybrid Port Energy GmbH, the barge will serve an LNG fueled floating power station delivering power to cruise ships in the Port of Hamburg, allowing them to switch off the their oil burning auxiliary engines during port calls.

Following its launch in Slovakia one month ago, the 76.7 m long, 11.4 m wide and approx. 1.7 m draft barge has been heading under tow via inland waterways towards the North Sea.

“Despite some narrow river bends and many locks, the 1,500 km trip up the Danube, Main and Rhine rivers has so far progressed with no trouble at all,” says Mr. Lehmann.

On arriving in Hamburg,the barge will be drydocked at the Blohm + Voss shipyard for final outfitting and for technical testing in a multi-stage test procedure. In mid-October, the connector for supplying power to cruise ships will be handed over to project partner AIDA Cruises as part of a naming ceremony. The LNG Hybrid Barge will then be connected via cable to the cruise ship AIDAsol for the first time, on a test basis.

The LNG Hybrid Barge is equipped with five generators with an overall output of 7.5 MW (50/60 Hz). These generators will be powered the first marine classified LNG fueled Caterpillar engines to be delivered to customers.