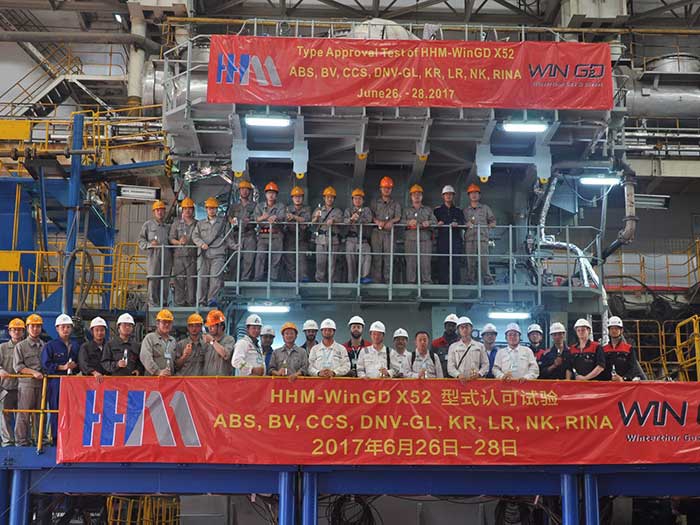 The newly certified engine is the five-cylinder version of the 52 cm bore X52 diesel from Winterthur Gas & Diesel (WinGD). Completion of the two test series signals that it is ready for commercial applications.

The certification processes were carried out on a five-cylinder X52 engine with a contracted output of 6,408 kW at 99 rpm and IMO Tier II emissions compliance.

With the tests completed, the 5X52 will now be delivered to power a 38,000 DWT bulk carrier under construction at the Guangzhou Wenchong Shipyard (GWS) in Guangzhou, China. GWS is also part of CSSC and the vessel will join the CSSC fleet on completion.

The conclusion of the X52’s FAT and TAT is especially significant since this new engine type has already won a considerable advance order book. Alexander Brückl, Senior Project Manager New Engines, and one of the WinGDs engineers present at the tests said: “The X52 has proven very popular as it is an intelligent engine; its FAT and TAT have been eagerly awaited by both shipyards and their customers.

“This very rapid market acceptance is based on the reliability and performance the Generation X diesel and dual-fuel engines have exhibited in service to date. This is also reflected in the fact that we have had the confidence to perform the TAT on the very first engine rather than a later engine, as the classification societies allow.”

Including the test engine, a total of 14 engines are already on order. Mr. Brückl sayss that the major benefits ship owners wish to leverage are the low specific fuel consumption and reduced service costs of the Generation X diesel engines.

The reduced fuel consumption results primarily from the longer stroke configuration of WinGD’s Generation X engines, but they also have a relatively light structure and are designed to have low maintenance costs.

“The long stroke design enables higher torques at lower engine speeds compared with earlier WinGD engines,” says Mr. Brückl. “Due to a larger diameter, more efficient propellers can be employed. At the same time, however, our designers were very aware that an engine’s stroke dimension has direct effect on engine height which, in turn, has a considerable influence on engine room size and the effective payload of a vessel. We chose a larger bore diameter and, as sales figures have shown, the bore-to-stroke ratio selected by WinGD is proving to be very popular.”

The X-prefix engines can also be offered with dual ratings which can be accessed via a minimum of modifications to engine and turbocharger components, enabling ship operators to readily employ a fuel-saving slow steaming mode.

The 38,000 DWT bulk carrier being built at GWS and to be powered by the 5X52 on which FAT and TAT certificates were attained can be qualified as an “intelligent vessel.” Anticipating the need for greater system integration, owner CSSC has specified several advanced digital features designed to facilitate maximised vessel efficiency as well as extensive remote monitoring and control of on-board systems for their intelligent vessel.

Of the thirteen engines still on order, all will be six-cylinder 6X52s to be built in Korea. They include both IMO Tier II and Tier III emission compliance, with the Tier III engines featuring both low and high-pressure SCR. Eight of the engines include six 6X52 engine rated 7,180 kW at 86.9 rpm and employing high-pressure SCR to achieve IMO Tier III compliance. The Tier III engines will power a series of six 49,000 DWT petroleum products tankers. The other two engines with the same rated output are Tier II compliant and will be installed in two 50,000 DWT product tankers.

Finally, five 6X52s rated 8,200 kW at 80 rpm will power a series of five 60,000 DWT open hatch general cargo vessels. These X52 engines will be Tier III compliant thanks to the use of a low-pressure SCR system.