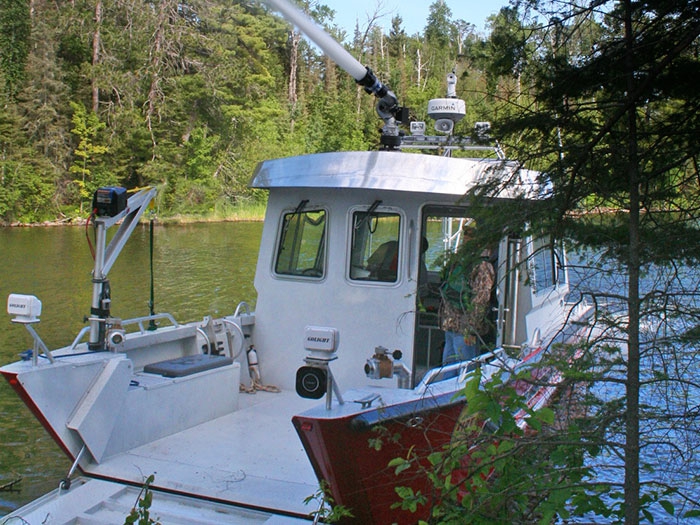 The craft,  owned and operated by the Lake Vermilion Fire Brigade,was used to haul up to 20-person crews, and their canoes and equipment to staging areas to fight the blaze. The fire, located approximately 10 miles west of Ely, Minnesota in the Boundary Waters Canoe Area Wilderness (BWCAW), consumed a total of 936 acres and was contained and controlled on June 2.

“Providing support to wildland firefighting efforts on shore is an important role for the fireboats we build,” said Chad DuMars, Lake Assault Boats vice president of operations. “We are very proud that organizations like the Lake Vermilion Fire Brigade are here to help protect structures and vital natural resources such as the BWCAW, and that our boats play an important role in the brigade’s mission.”

Don Potter, the Lake Vermilion Fire Brigade president and operations chief, said “We often assist the Forest Service, DNR, County Rescue Squads, and municipalities and go wherever we’re needed; we’re extremely reasonable and have state-of-the-art equipment. Last year, in the same area, we were responsible for structure protection during a prescribed burn. We did a lot of pretreating of fuels, using our boat’s large roof monitor and spraying the shoreline. We also quickly extinguished a spot fire that was caused by firebrands flying across the lake.”

The landing craft style boat – with a ten-and-a-half foot beam – features twin 300 hp outboards that can reach speeds of up to 50 mph. The fireboat is equipped with a 1,600 gpm water pump, a 300 hp V8 pump engine, and three discharges – including a high flow monitor and water cannon.

“Both of our boats were designed over the course of many meetings with an expert team from Lake Assault; their people are fantastic,” said Potter. “They’re a very talented group and it’s a quality product. The thing about Lake Assault is that they can make just about anything.”